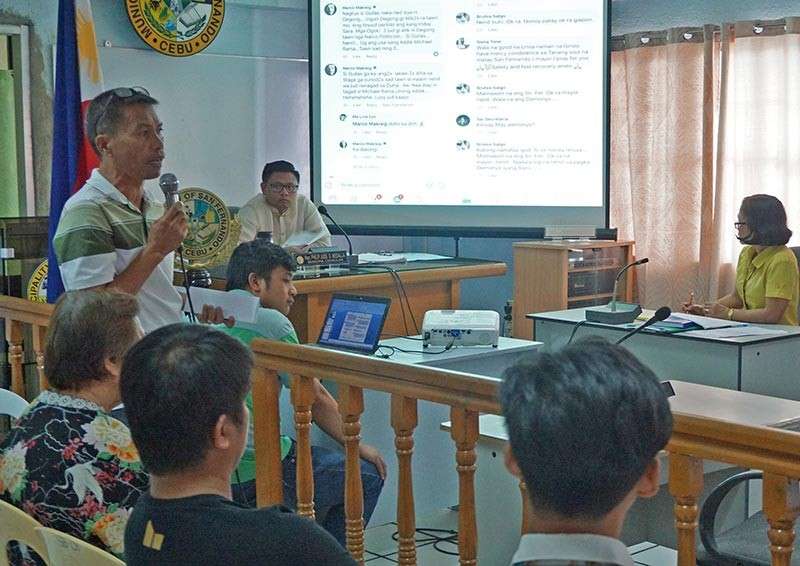 SAN FERNANDO. Acting Vice Mayor Philip Jude Medalla convenes the municipal council for a special session to hear the security concerns raised by those named in a second “kill list.” Felomino Leyson (standing, with microphone), San Fernando Purok Federation president, and three others named in the list (backs to the camera) showed up at the council meeting on Monday, March 4, to air their worries over the peace and order in their town. (SunStar photo / Alex Badayos)

A SECOND “kill list” containing the names of eight people, a few of them running for town councilor on May 13, has been circulating in San Fernando, Cebu.

This prompted the Municipal Council to call for a special meeting yesterday, Monday, March 4, to act on the “kill list.” The list, which circulated through the Facebook group page “Mga Estorya sa Politika sa San Fernando,” contains names of some townsfolk allegedly involved in illegal drugs.

It also came almost two months after four public officials of San Fernando were gunned down in separate incidents.

Medicielo, Loguiber and Enad are in the slate of San Fernando Mayor Lakambini Reluya, who is seeking reelection. She survived an ambush on Jan. 22, 2019 in Talisay City.

Loguiber’s daughter, Jennifer, and Richie Paul Manugas, a local businessman in San Fernando, are also named in the list.

Due to the “existence” of a second kill list, four groups have sought the help of the San Fernando Municipal Council to look into its source and circulation.

But during the session on Monday, March 4, the municipal council, presided over by acting Vice Mayor Philip Jude Medalla, urged the the groups to take their complaint to law enforcement authorities.

In their complaint, members of the Pag-asa Youth Association of the Philippines (PYAP) San Fernando chapter, the ABLE Citizens of San Fernando Association, the town’s Office of Senior Citizens Affairs (Osca) and the local purok federation asked the municipal council to investigate the “dummy accounts” that are circulating the second kill list.

“San Fernando has been making headlines in almost all newspapers these past few days because of the killings of known people. With this, we think it is not appropriate to neither make fun nor threaten people just as anyone pleases to do,” said Ruth Sasil, president of ABLE Citizens-San Fernando, in her letter.

Leyson, who was mentioned in the list, also showed up before the council to ask local legislators to summon Neil Enriquez, a former town councilor and municipal administrator during the time of former town mayor Antonio Canoy, as he was identified to be the administrator of the Facebook page where the list was posted.

Leyson said Enriquez’s participation indicated that the second kill list may have been masterminded by critics of Reluya’s administration.

Reluya will be facing businessman Ruben Feliciano in the May 13 elections.

Leyson denied he had any links with the illegal drug trade, as claimed in the post.

Leyson said he has sought the help of the Cebu Provincial Police Office (CPPO) to help identify the source of the list.

He said that ever since the list was published, strangers have been following him.

Leyson has sought the police for security.

Through SunStar Cebu, Medicielo called upon those responsible to stop what they are doing in the name of God.

Medicielo said the allegation against him has worried his family.

On his end, former town councilor and administrator Enriquez denied he was behind the publication of the second list and the administator of the Facebook group page.

“As usual, like Mayor (Lakambini) Reluya, they both claim that I have something to do in whatever situation they are in, just because I’m a known critic. But when asked by the police to show any verifiable direct evidence or proof on their claim, they have none to show. All they could produce are hearsay, made by dummy accounts,” Enriquez told SunStar Cebu.

San Fernando Police Chief Lymel John Pascuin asked the groups to formally report their concern to the police so that police can look into it.

Pascuin said he is aware of the threat circulating online but he cannot ascertain its authenticity especially if dummy accounts posted it.

An earlier “kill list” came out just before the murders of public officials in San Fernando began early this year.

They were allegedly linked to self-confessed drug lord Franz Sabalones, brother of San Fernando Vice Mayor Fralz Sabalones who has gone on leave from his duties.

Nonoy Reluya had spoken about the kill list following the deaths of Dacalos and Arriesgado in January 2019.

He and Mayor Reluya and four other companions were ambushed in Talisay City on Jan. 22. Nonoy and two others died on the spot.

Mayoral aspirant Feliciano has denied he made the kill list although he said that Reluya, his wife, and the four councilors had links with Sabalones and warned them that death would come for them if they would not withdraw from the electoral race.

Of those mentioned in the first list, only Mayor Reluya and Villaver remain alive. But Villaver is missing. (JKV, MPS)