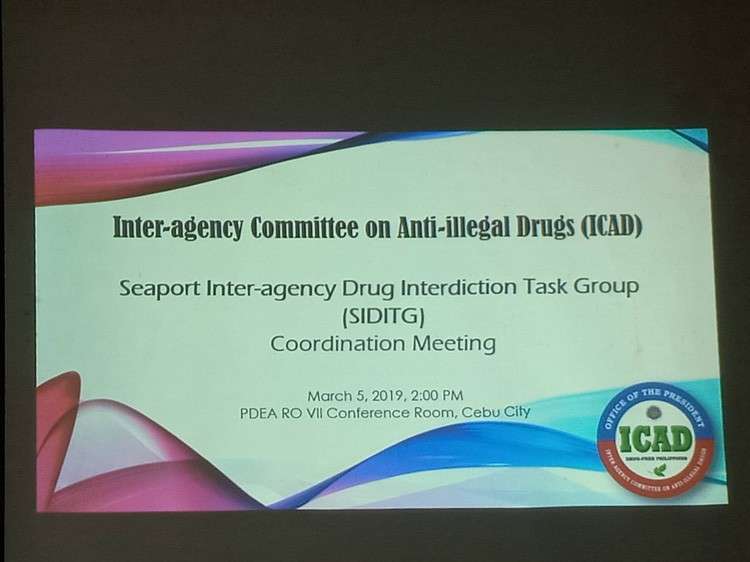 THE government's war on drugs in Region 7 gets a revamp as an inter-agency task group that will focus on protecting seaports and coastlines was created.

The Seaport Inter-agency Drug Interdiction Task Group or the SIDITG works closely with different government agencies like the Philippine Drug Enforcement Agency, Bureau of Customs, the National Bureau of Investigation, Bureau of Fisheries and Aquatic Resources, the PRO7 Maritime Police, Philippine Coast Guard, Naval Forces Central among other with the purpose of protecting the coasts of Region 7 from illegal smuggling of drugs.

The task group was created because drug personalities take advantage of the vast and usually unguarded coastlines in Region 7 to transport drugs.

The increasing number of private ports that cannot be regulated anymore solidified the need of a committee that relays important information to one another.

The group held a meeting Tuesday, March 5at the PDEA 7 office to talk about their strategy.

"We are conducting this meeting to update, empower and to calibrate our plan of actions. Collaboration is very important for us, because according to our president, we need a whole government approach to combat drugs," said PDEA 7 Director Wardley Getalla.

Director Getalla then added that the victory over the war on drugs and achieving their objectives would be impossible without an active participation from the community especially those who are in the coastal areas because some of these contrabands are being transported through small pumpboats and their numbers are not efficient for the vast coastlines of Region 7.

The main objectives of the task group is to coordinate their efforts in controlling the entry and exit of illegal drugs, to deter inbound and outbound trafficking of illegal drugs, to generate useful information for law enforcement and prosecution purposes, to orchestrate efforts and provide assistance towards apprehension and prosecution of member of drug syndicates and to accurately identify, efficiently neutralize and effectively coordinate prosecution by inter-agency members leading to punishment of persons or syndicates engaged in drug smuggling and their cohorts.

According to Getalla, It is extremely difficult to stop the entry of every illegal contraband because these drug syndicates are very well-organized and well-financed but they would be doing their very best to deter the smuggled contrabands by collaborating and helping each other so that they could keep an eye on the seaports of Region 7.