Becoming ‘a fisher of businessmen’ 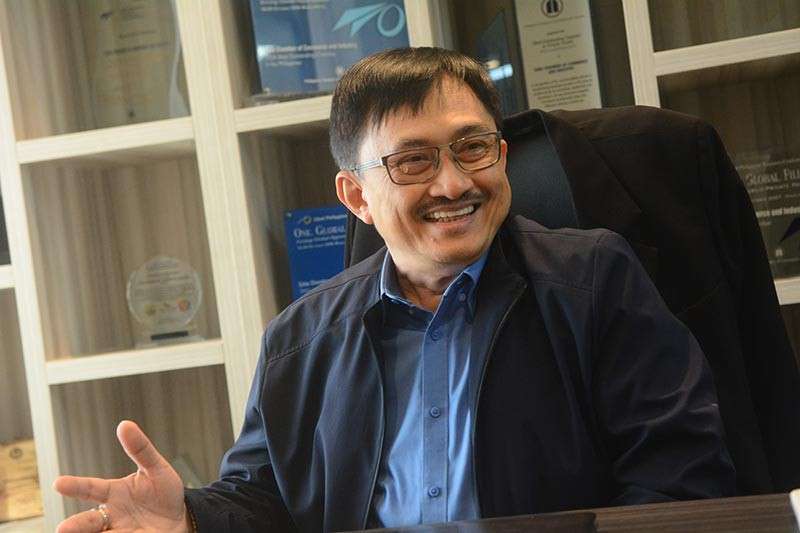 But a call in early January from CCCI’s trustees altered Espeleta’s plans for the year, which were all centered around growing his consultancy business.

“This isn’t really in my bucket list. I was surprised,” said Espeleta, adding that at the time, the trustees of the 116-year-old chamber already agreed on someone to elect.

Espeleta prayed to make the right decision, since the board wanted him to decide by Jan. 10.

“I asked God to tell me His plans for me,” he said, noting that becoming CCCI’s president is no easy task. It eats up time that is meant for family and business.

“And as I listened to the reflection of the verse, I was moved by God to accept the invitation. Then a 2010 trip to Mount Tabor crossed my mind where an inner voice told me that I have a mission—that I would become a fisher of businessmen. That wherever I’d go, I would bring Him to the workplace and that I should start with families in business,” he said.

He initially brushed off what he heard until a Filipina tour guide, after their 10-day trip, told him that he had a mission in business. “That actually reaffirmed what I heard in Mt. Tabor and since then, I focused on helping out families professionalize their businesses,” said Espeleta.

He founded Famcor Franchise Management and Executive Development in April 2010 and it became a registered company under the Securities and Exchange Commission in November of the same year.

Espeleta has been with CCCI since 1993, when he was the plant manager of La Tondeña Distillers Inc. He is the 37th president of CCCI.

Espeleta finished chemical engineering in the University of San Carlos in 1982. He immediately landed a job in a copper smelter and refinery in the Philippines where he worked for seven years.

His love for learning led him back to school, where he took a two-year program at the Asian Institute of Management (AIM).

After AIM, he went to Davao and worked for a real estate company. In 1992, he was invited to join La Tondeña.

For 18 years, Espeleta devoted his time working for somebody else. He decided to shift to business after working on the side as a consultant for Julie’s Bakeshop, which eventually hired him to work full-time and became the company’s president.

Espeleta said he returned to the corporate world because the work involved helping a family professionalize their business. He said he was hands-on in transitioning the family business into a corporate one. On the side, Espleta was doing freelance consulting for other businesses.

It was in 2010 when he finally left the corporate world and established his own business.

“I began asking myself what do I do best that is truly needed, that I can do for a living,” he said, adding that being tied up in the corporate world only gives one limited opportunities to pursue other worthwhile things.

Espeleta’s active involvement in the chamber led him to roles that involved, not only growing the family businesses but also empowering the small and medium enterprises.

Being the chamber’s vice president for business development last year, Espeleta headed the Kapatid Mentor Me (KMM), a program in collaboration with the Department of Trade and Industry and the CCCI.

He helped craft the 12-module mentorship program of the trade agency that spans a 10-week period of coaching.

I was hired as a plant supervisor in Pasar (Philippine Associated Smelting and Refining Corp.) in Leyte. I was tasked to oversee the operations of the plant. I worked there for seven years until I went back to school.

I came across the Japanese concept “ikigai,” which translates to “reason for being.” When I left the corporate world in 2010, I reflected on which path to take after.

I wanted to do something different. I wanted to pursue something that was beyond making money and hand-holding family-run enterprises, seeing them grow into corporations, and bring a sense of fulfillment. I was doing Famcor single-handedly until I was able to grow it and hire fellow consultants to help family businesses in the country professionalize their operations.

It came to a point that I asked myself, what will give my life a special meaning? Of course, I didn’t like to do the same thing others were already doing. I thought hard which sector I would help. I looked for niche markets on who needed the most of what I did best and who were willing to pay me.

It was on a pilgrimage tour in 2010 in Mount Tabor in Israel, the same mountain where the transfiguration of Jesus took place, that I also experienced a transformation. An inner voice was saying to me that I have a mission and that I’ll become a fisher of businessmen, and that I would start with families with businesses.

Businesses run by families need a third party, a non-family member, to objectively assess what needs to be done to professionalize a business if they want to become big or sustain their operations. You have to look at the systems, strategies, desires of the family members, and the values. It is kind of challenging for a consultant because you have to help out in both the business and family aspects and deal with the issues. You help settle conflicts and align them with one vision.

Maybe for smaller businesses, this isn’t an issue. But for big family-run businesses, individual differences are a source of conflicts. They need guidance on where they want to go.

I went to AIM for advanced studies, but my skills were honed as I helped one business to another solve conflicts and craft their succession plans. My experience in the field taught me a lot.

Prior to Famcor, I ventured into a distribution business but this venture only lasted for three years. I was so confident that I thought, with the experience I had in La Tondeña, I’d be able to make my own business take off. I distributed household products like soaps, dishwashing products, toothpaste and diapers to different areas like Ozamis and Cagayan de Oro. The business did well for two years.

But as I got involved more in sales, I left another important part of the business, which is production. I failed to closely look at the quality assurance of the production. Aside from that, I suffered a cashflow problem when one of my big distributors failed to pay me their dues. I was over-trusting.

Other events also happened that time such as the 9/11 attack, which paralyzed businesses a bit.

But that experience didn’t stop me from doing business. At that time, I learned that it was something that I wasn’t good at. I realized it wasn’t for me but it taught me a lot.