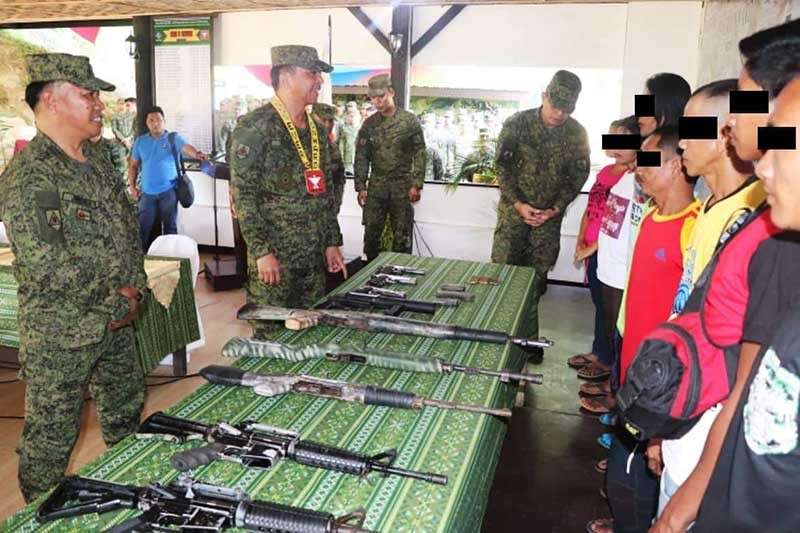 THE fourth Infantry Division (4ID) now has a total of 346 New People's Army (NPA) surrenderers since it launched its so called "peaceful war" this year.

They also surrendered their assorted firearms and explosives which include; two M16 rifles, two US Garand rifles, one US Carbine rifle, one Improvised M79 grenade launcher, three .45 pistols, one improvised anti-personnel mine and one hand grenade.

Their surrender now brings the total number of recovered firearms to 53 assorted firearms and other war materials.

Tonton (not his real name), one of the squad leaders, told the army that their decision came after witnessing the surrender of their former comrades in December last year, who received support through the Enhanced Comprehensive Local Integration Program.

Brigadier General Andres Centino, Commander of 401st Brigade who is leading the campaign to rid Agusan del Sur of NPAs said now is the best time to surrender.

“We cannot continue killing each other because our country and its people will only suffer. The government is doing all it can to promote a just and long-lasting peace by facilitating the delivery of basic social services especially to poor and marginalized communities," Gacal said.

"We encourage everyone to unite and give peace a chance because it is the best we can offer to the next generation,” he added.

However, Communist Party of the Philippines founder, Jose Ma. Sison, since last year, said that the nationwide campaign of the military and the government in general of these surrenderers were "fake," and that those who surrendered were not real NPA members.

In earlier reports from the media, he accused the military of pocketing "incentives" in every "fake" surrenderer. ( PJO)