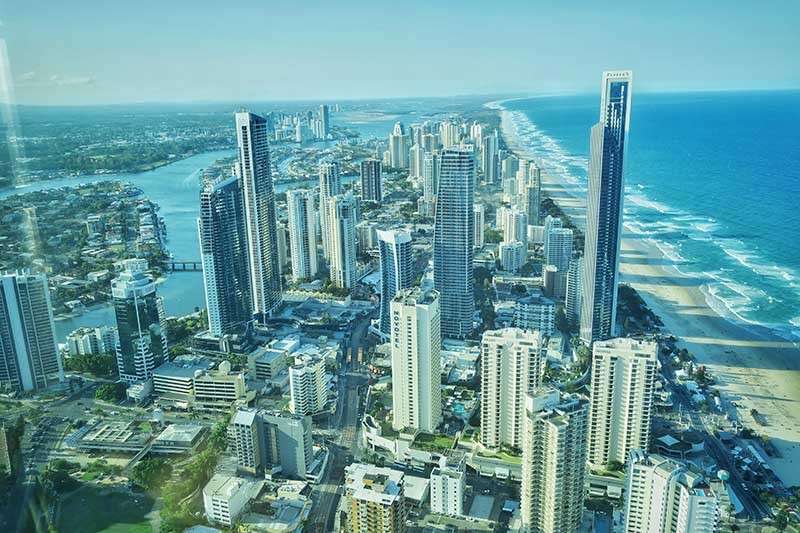 Pacific Ocean on one side and on another, houses and skyrises interlaced by long and wide canals. (Crystal Neri) 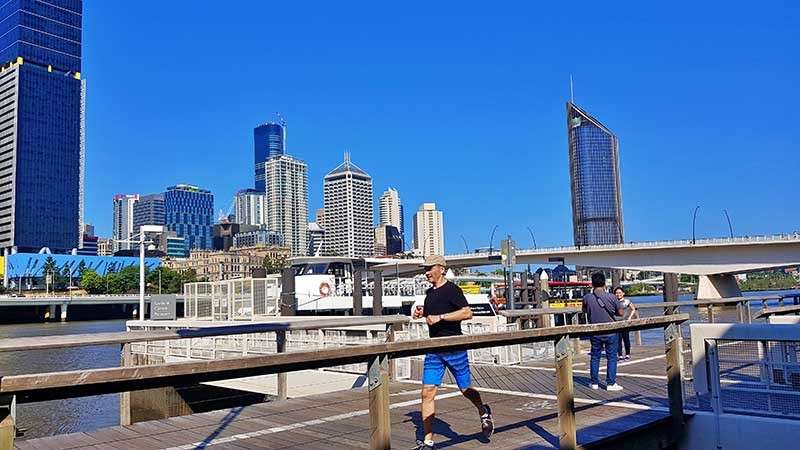 Brisbane’s a buzzing city where locals get bronzed in a man-made sandy beach while staring up at dazzling skyscrapers. (Crystal Neri) 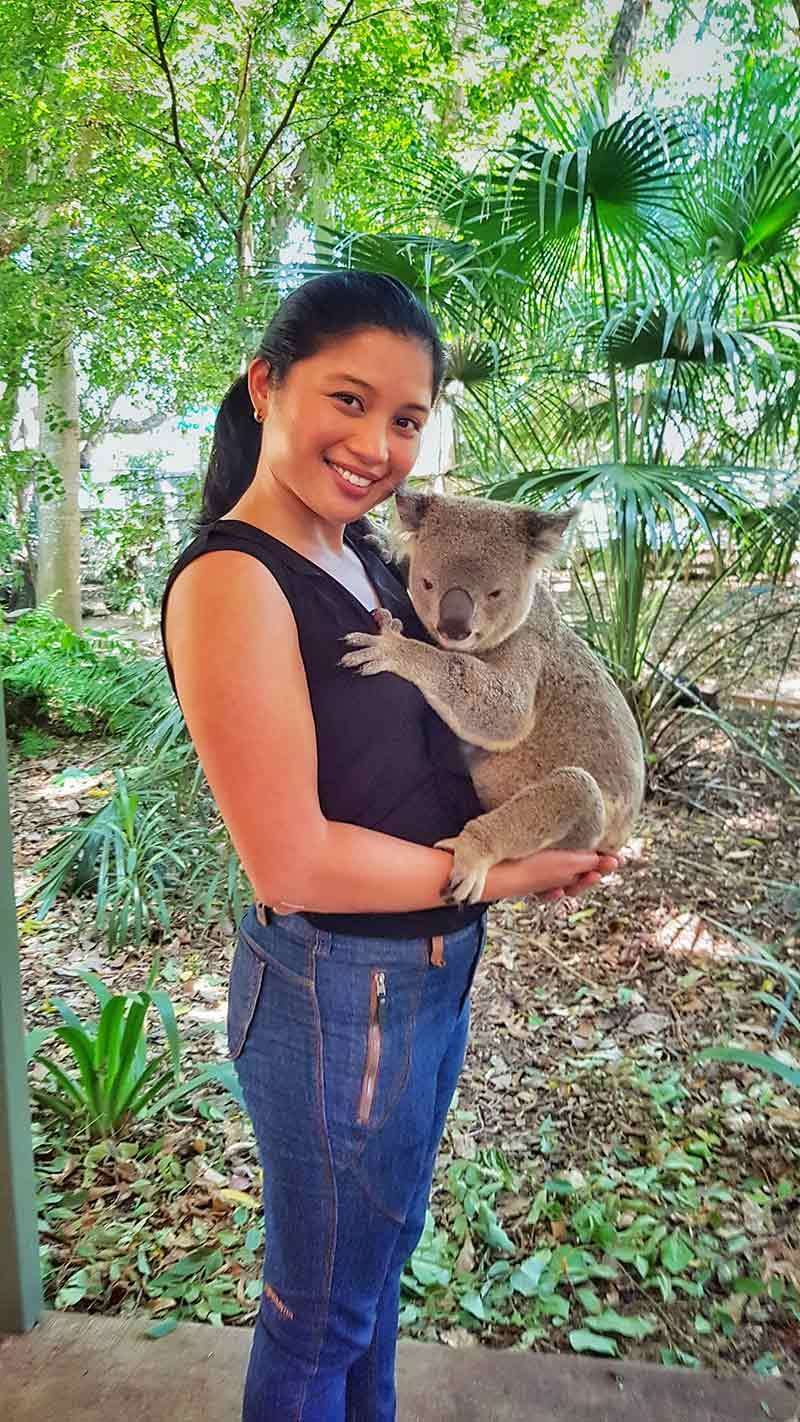 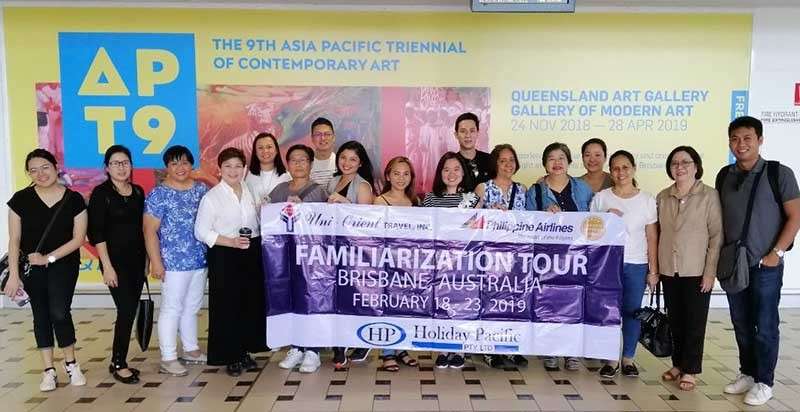 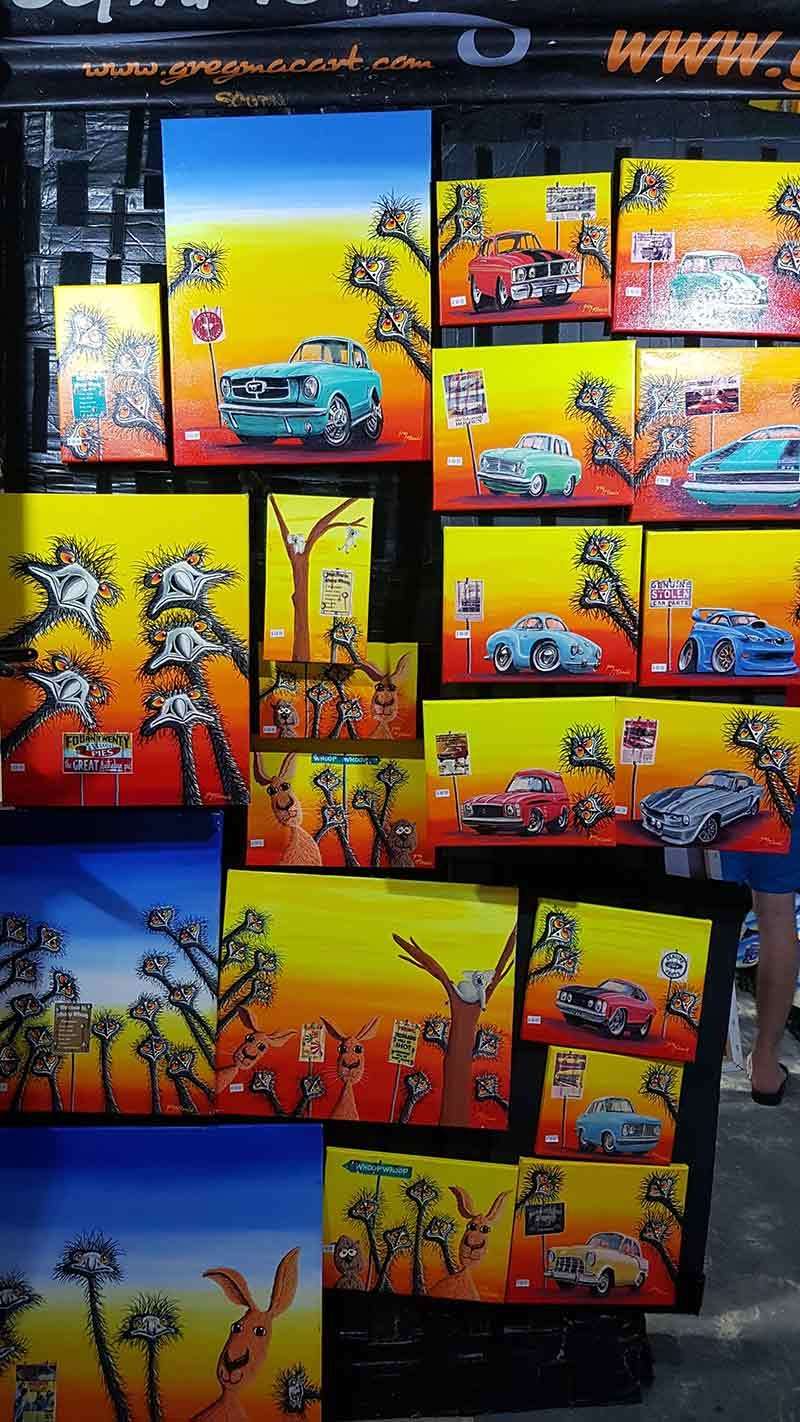 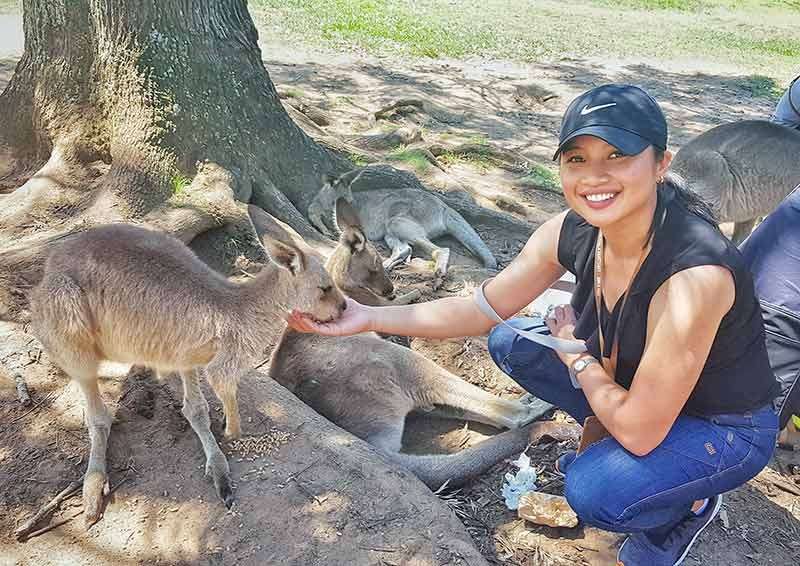 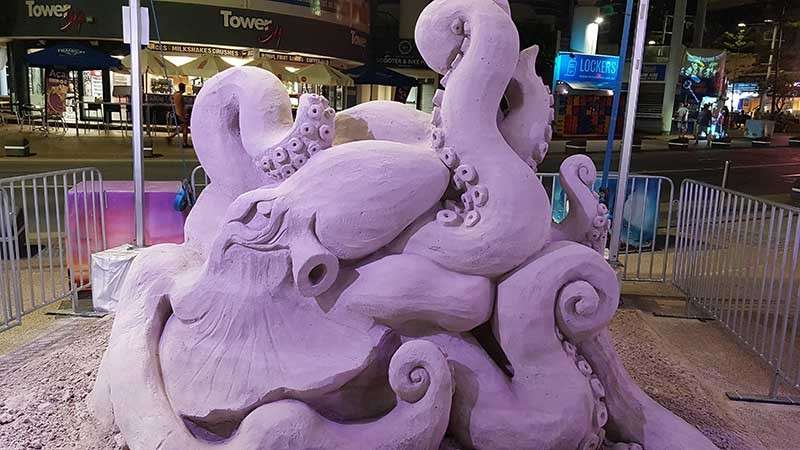 ‘Ocean Dance’ by Anne-Marie Taberdo, one of the entries to the sandcastle building contest in Surfers Paradise Beachfront Market. (Crystal Neri) 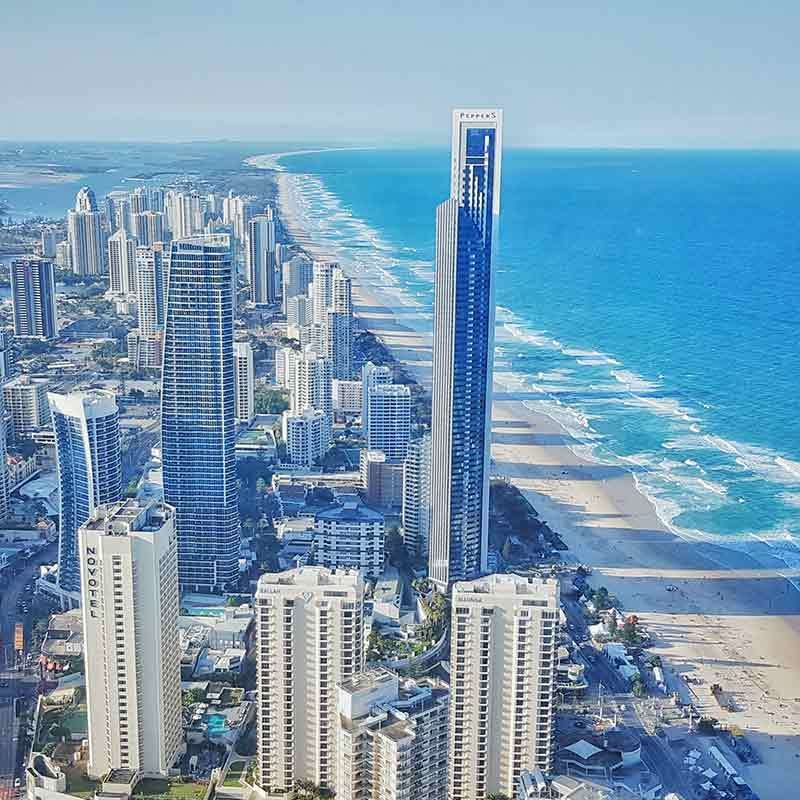 IN A lush sanctuary in Brisbane, our group lined up to cuddle Australia’s most iconic animal, the koala. It was a dry February with threats of a heat wave, but the humidity did not quash our excitement. Once I held the koala, I peeked into its beady eyes and felt its sharp claw and dense grey fur against my shoulders.

This unique photo-op with the adorable marsupial, exclusive only to a few states in Australia, was just one of the many highlights of our Brisbane famtrip. Sponsored by the country’s flag carrier, Philippine Airlines (with tour escort Marijo Araneta) and coordinated by Uni-Orient Travel (Jerome Mendaros), our 17-person delegate included travel agents from Cebu, Iloilo, and Davao.

Philippine Airlines (PAL), awarded recently by London-based air transport rating organization Skytrax as a four-star airline, took their motto Buong Pusong Pag-alaga to heart for our journey. Given access to the Mabuhay Lounge in Cebu and Manila and choice seats, I was comfortable enough to sleep during most of the seven-hour plane ride to Brisbane. As part of its ever-expanding fleet, PAL is now offering daily direct flights to and from Manila and Brisbane.

Brisbane, the capital of Queensland, has long been living in the shadows of Sydney and Melbourne. “Beautiful today, perfect tomorrow,” locals say about the weather in Queensland, also called the Sunshine State, for its warm climate. But while blue-skied Brisbane may not be the first in mind to visit in Australia, it was worth it just for a chance to hug a koala. Beneath its humble reputation, Brisbane’s a buzzing city – a place where locals get bronzed in a man-made sandy beach while staring up at dazzling skyscrapers.

It took us just an hour-drive south of Brisbane to get to Surfers Paradise in Gold Coast City. “Anybody knows what barbie means? What about arvo or mozzie?” asked our blonde tour guide, Deborah. She was giving us a lesson about local vernacular while on the bus. “No, we don’t know!” we answered back. “It means barbecue, afternoon, and mosquitos. We Australians love using shortcuts to our words,” Deborah explained. “We call it, strine.”

This lecture on Aussie peculiarity made us giggle and warmed us up to the local culture. Soon after, our bus pulled up to a show-stopping sight. In Surfers Paradise, a vast white-sand beach served as a backdrop to busy streets lined with shops and al fresco dining.

For the first few days, we stayed at two different hotels, Novotel Surfers Paradise and Mantra Legends Hotel. Both had ample-sized balconies, offering views of the beachfront boulevard vista and were as perfect a spot as anyone could find in the heart of the neighborhood. The location was unbeatable – just a few minutes’ walk from the famous beachside night market where 120 stalls sell everything from opals to homemade nougat.

There are thousands of vantage points to see Gold Coast, but none are quite the same as Skypoint, an observation deck atop the 230-meter tall Q1 building. As soon as I stepped out of the hyper-fast elevator, I was floored by the view. The white-sand coastline seemed to stretch infinitely into the horizon. I thought I’d seen the end at one side, and instead saw the other extension of the pristine seaboard surrounded by houses and commercial spaces interlaced by wide canals.

Far beyond was a glimpse of the hinterland, where a more dense seat of mountain and forest awaited. In Skypoint’s 360-view observation deck, I took the best photos of the trip, wearing my striped light blue and navy cotton dress that mimicked the color palette of the sweeping seascape.

A hotel of dreams

Another highlight of the trip was staying at the Star Gold Coast, a five-star hotel known for its world-class casino. Our Pinoy group enjoyed a buffet of dreams at Harvest with just-caught spanner crabs, oysters, and prawns. As a chocoholic, I especially loved the decadent chocolate fondue which dripped off large green cocoa leaves made of glass.

Star Gold Coast on Broadbeach was just a seven-minute walk from Pacific Fair, Queensland’s largest shopping and dining hub. I got to buy souvenirs from American brands Target and K-Mart and macadamia nuts in an Australian supermarket, Woolworths. Some folks in our group bought so much stuff that they had to buy extra luggage. We shopped at Harbour Town too, the country’s biggest outlet shopping center.

At the end of the trip, I stepped onto our hotel balcony to take in the view of Surfers Paradise. It was early, so there were sunrise surfers already out at sea. Seagulls screamed and waves crashed against the shore. The wind gusted and tugged at my sunglasses. I watched birds hop from one roof to the next and thought how lucky I was to have spent a week in Gold Coast, stunned by its postcard-perfect views.