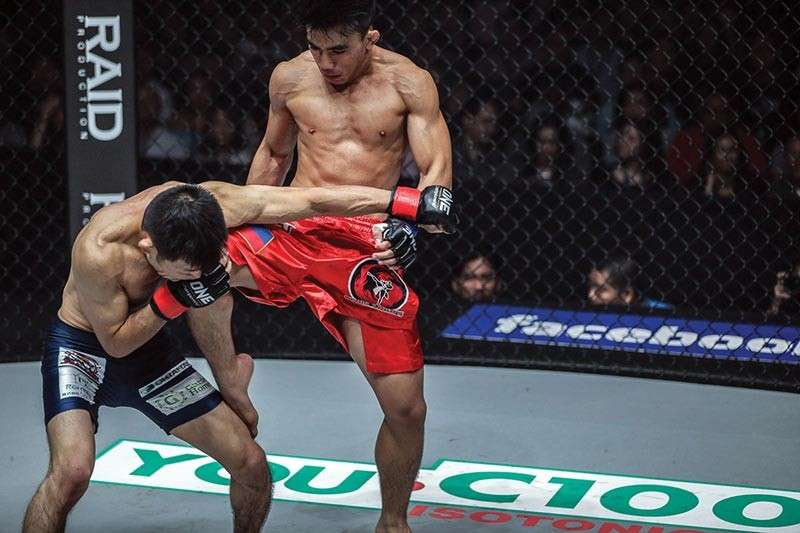 Conclusive. Joshua Pacio who will be up for a rematch against Saruta is seeking a decisive victory in their rematch in April. (One Championship Photo)

WITH the looming rematch between current world champion Yosuke Saruta against former strawweight titlist Joshua Pacio of Team Lakay, coach Mark Sangiao said they are seeking to finish the Japanese when they both meet in the co - main event of One Championship’s “Roots of Honor.”

The much anticipated rematch is set on April 12 at the Mall of Asia Arena which will be headlined by featherweight world champion Martin Nguyen defending his belt against a formidable foe, former world champion Narantungalag Jadambaa.

Sangiao said with the controversial loses of Pacio and Geje Eustaquio which cost them their world title, they are looking to finish Saruta early.

“We don’t want our fate to be decided by the judges. We have to win decisively,” adds Sangiao.

Pacio was initially scheduled to take on Hayato Suzuki at ONE: Eternal Glory earlier this year but was forced to withdraw from the bout due to injury, and Saruta was tapped to take his place in the main event opposite the Filipino.

Using his world-class striking and grappling skills, Saruta put together a comprehensive performance, upsetting Pacio to capture the belt. However, the extremely close result was enough to warrant an immediate rematch between the two.

Chatri Sityodtong, ONE Championship CEO has ordered the immediate rematch believing Pacio was the rightful winner of the strawweight title bout against Saruta in Jakarta last January.

Sityodtong, in a Facebook post, added Saruta did not do enough to earn a decision win against Pacio.

Sangiao added while the decision was already handed down, there is no use in sulking over Pacio’s defeat saying they have move on and instead focused on reclaiming the world title anew.

Meanwhile, 29-year-old Nguyen Jadambaa meet for the first time in the main event of ONE: Roots of Honor, in a five-round World Title tiff that promises loads of action and fireworks. Nguyen has become one of the most prolific Asian martial arts talents over the past few years, winning seven of his last nine contests. In 2015, he embarked on an unprecedented six bout winning streak, along the way capturing both the ONE featherweight and lightweight world titles in the process to become a simultaneous two division world champion.

After falling to injury however, Nguyen was prompted to vacate the lightweight strap last November. Now, with Nguyen fully recovered, the Vietnamese-Australian stalwart is slated to make his much-awaited return to action against the dangerous veteran Jadambaa.

Jadambaa burst onto the ONE Championship stage in May of 2014, defeating the Philippines’ Honorio Banario and has since been a winner of six of his last eight contests.

In 2014, he captured the ONE featherweight world title with a victory over Koji Oishi. Over the years, Jadambaa has defeated some of ONE Championship’s biggest names, with notable victories coming over Kotetsu Boku, Eric and Edward Kelly, and Kazuki Tokudome.