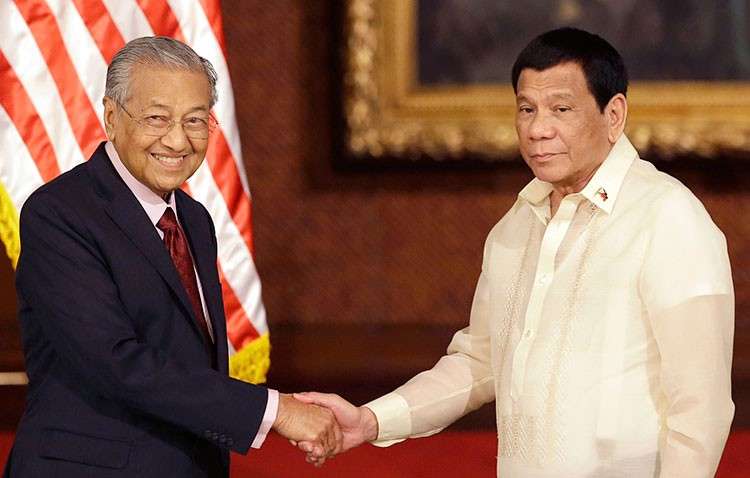 Mahathir, who paid an official visit to the country, arrived in Manila on Wednesday evening, March 6.

The Malaysian leader was welcomed by Duterte at Palace grounds around 3 p.m.

Prior to the official welcome rites, Mahathir graced the wreath-laying ceremony at Rizal Park in Manila at 2:30 p.m.

After the welcome ceremony, Duterte and Mahathir went to Palace's Reception Hall for the signing of guest book.

At 3:30 p.m., the two leaders would hold a restricted meeting at Palace's study room and would proceed to Aguinaldo State Banquet Room for an expanded bilateral meeting set around 4:45 p.m.

On Monday, March 4, Malacañang said Duterte and Mahathir are expected to discuss "mutual concerns" that are beneficial to both the Philippines and Malaysia.

Expected to be raised are "cooperation in the political, economic and people-to-people spheres, and exchange views on topics of mutual importance."

Duterte and Mahathir would issue joint press statements at around 4:45 p.m.

The issuance of joint statements would be followed by exchange of gifts at President's Hall and state banquet at Rizal Hall.

It was the first time Mahatir visited the country since he was elected the seventh Prime Minister of Malaysia in 2018.

Mahathir, a former strongman of Malaysia from 1981 to 2003, won for the second time as Malaysian Prime Minister last year. During his previous term as prime minister, he undertook bilateral official visits in the Philippines in 1987 and 1994. (SunStar Philippines)