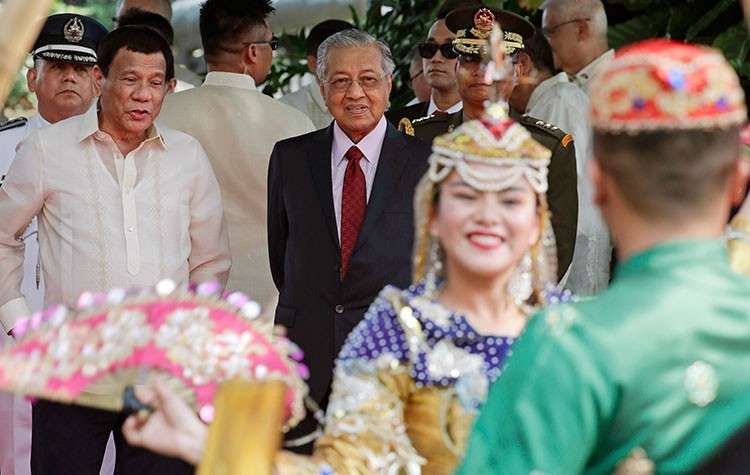 THE Philippines and Malaysia have renewed cooperation to ensure the development of Mindanao, following the ratification of the Bangsamoro Autonomous Region of Muslim Mindanao (Barmm).

President Rodrigo Duterte and Malaysian Prime Minister Mahathir bin Mohamad, who is visiting Manila, reached an agreement on cooperation after their expanded bilateral meeting at the Malacañan Palace on Thursday, March 7.

"The road leading to the historic transition to the Bangsamoro Autonomous Region was paved in large part by the support of our international partners. Malaysia occupies a prominent role in this roster of friends. The good work will have to continue," Duterte said in a joint press statement with Mahathir.

It replaces the Autonomous Region in Muslim Mindanao and has expanded land and water jurisdiction, greater fiscal autonomy, and increased share in national government resources, among others.

The new Bangsamoro region will be governed by the 80-man Bangsamoro Transition Authority until the election for regular members of the Bangsamoro Parliament takes place in 2022.

Mahathir, for his part, vowed to boost the economic ties between the Philippines and Malaysia, considering the "vast economic potential" of Barmm.

"Given the vast economic potential of this area, I believe with the establishment of the Bangsamoro Autonomous Region of Muslim Mindanao or Barmm, we have to boost economic ties between both countries. I therefore assured Mr. President of Malaysia’s desire to continue to be of help in the development of Mindanao," he added.

Duterte stressed that there was "much to look forward," now that the two nations "write a new chapter of cooperation."

Apart from Barmm, the President noted that he and Mahathir also affirmed to ramp up cooperation to address security issues like terrorism, piracy and transnational crimes, including the fight against the illegal drug trade.

Mahathir said they committed to take the necessary steps to address the serious issue of terrorism and violent extremism through the Trilateral Cooperation Agreement.

"Under this framework, Malaysia and the Philippines together with Indonesia have agreed to undertake unilateral maritime and air patrols to tackle the growing security challenges," the Malaysian prime minister said.

Duterte emphasized that there was a commitment from the Philippines and Malaysia to further enhance trade, investment and infrastructure development.

Mahathir said he and Duterte likewise pledged to encourage private sectors from both countries to explore opportunities of collaboration and venture in new cooperation and investments.

He also expressed hope that the memorandum of understanding between Malaysia and the Philippines on cooperation in the field of health would be signed.

Duterte and Mahathir likewise said they exchanged views on a number of regional and international issues of mutual interests, like the South China Sea disputes and cooperation within members of the 10-man Southeast Asian bloc.

Duterte dubbed Malaysia as the "Philippines's partner for progress and brother for peace," which will "continue to play an important role as we generate and continue to progress our shared aspirations for the greater peace, progress, prosperity and stability" in the Southeast Asian region.

"Mr. Prime Minister, your visit reaffirms the friendship between our two peoples and nations, and demonstrates your strong resolve as our partner for progress and a brother for peace," Duterte said.

"Our discussions today augur well for other countries and for ours. As we reviewed the milestones achieved in further strengthening our bilateral relations, we also charted new paths [for] collaborative work. (SunStar Philippines)