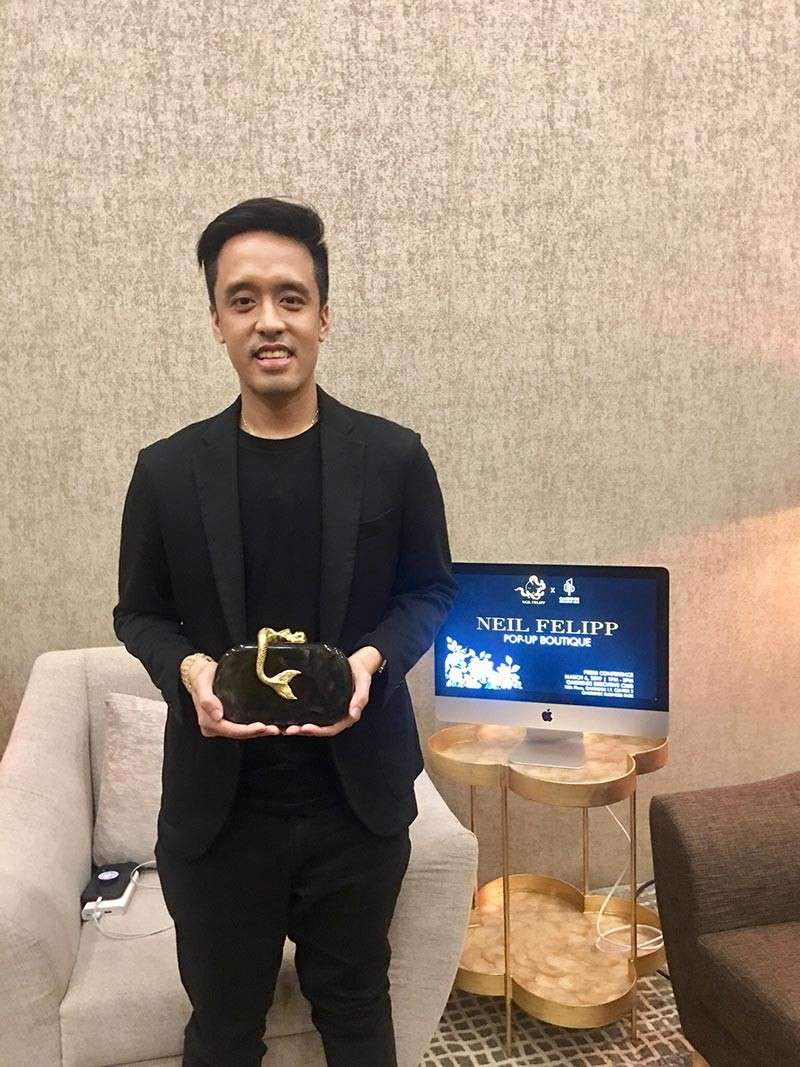 CREATIVITY: Cebuano designer Neil Felipp San Pedro believes Cebuanos have what it takes to land a spot in the global design stage. More than the excitement he feels when foreign buyers collect his minaudières, he beams with pride and joy when his fellow Cebuanos ask him to create a special clutch designed just for them. (Contributed photo)

CEBUANO designer Neil Felipp San Pedro said he is wiling to work with the Department of Tourism (DOT) to open up his showroom to tourists visiting Cebu.

This is in response to DOT Secretary Bernadette Puyat’s call on Cebuano designers and exporters to make their showrooms become part of the travel itineraries of tourists.

San Pedro’s collection of minaudière instantly became a global hit after his pieces were used in the Crazy Rich Asians film last year. A minaudière is a women’s fashion accessory also known as a box clutch, a substitute for an evening bag.

“I am open to open up my showroom to tourists who come to the Philippines. Not only that, we also want to inspire the next generation of designers,” said San Pedro.

But San Pedro said he will still have to make the studio look better before he starts welcoming tourists.

Showrooms as a destination

“The studio right now, is still under renovation and with the orders we have now, it’s a bit messy. But yes it’s possible,” said San Pedro.

Opening up showrooms, according to Puyat, is a good marketing strategy to boost arrivals to the country. She said that showrooms do not just lure tourists to buy products, but also market the country’s rich story on people and culture.

“We want other showrooms to open because tourists would love to visit them,” said Puyat adding that the county’s export-quality products speak volume of Cebu’s excellent craftsmanship.

She said Cebu could be the lead-province in making showrooms as a tourist attraction as more Cebuanos rise in the global spotlight in the field of food and creative sectors.

“Tourists would love to know the story of every export product we make,” she said.

Puyat lauded San Pedro’s success in bringing the Filipino’s creativity and craftsmanship to the global arena.

San Pedro is mounting a one-day pop-up boutique on March 23 at the Bamboo Room of Oakridge Executive Lounge on A.S Fortuna St. from 10 a.m to 6 p.m.

According to San Pedro, since the showcase of his pieces in the Crazy Rich Asian film, buyers not just in Asia but also in other countries have become interested in his collection.

Even in the local scene, San Pedro said his minaudières were well accepted by Cebuanos with many of them prefer to own a piece which design is only theirs despite paying a premium price.

“They really want one for themselves and they don’t mind the premium fee. Internationally, we noticed that the buyers are mostly collectors,” he said.

San Pedro said his team is also working with communities in the Philippines where he sources his raw materials. He said it is about high time to further lift the “Made in Cebu” and “Made in the Philippines” flag in the global stage.

“We are already a global brand. In fact, a lot of creatives here are vying for Cebu to become a Unesco ‘Creative City of Design’,” said San Pedro.

A piece of San Pedro’s minaudière costs at least P36,00 depending on the design and the intricacies that come with it.

This young designer is also exploring the creation of fine jewelries which he will launch soon. (KOC)