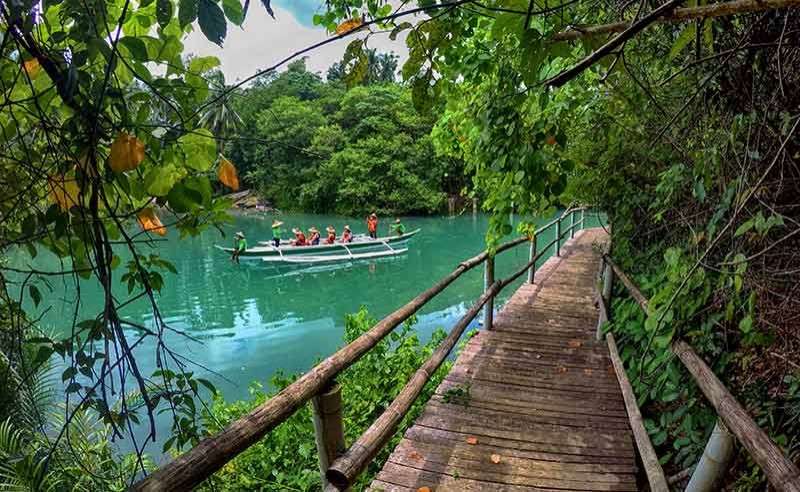 No motor boats here. Tourists are taken on a boat ride along the Bojo River. To preserve the beauty of the river, only paddle boats are allowed. (SunStar File Photo) 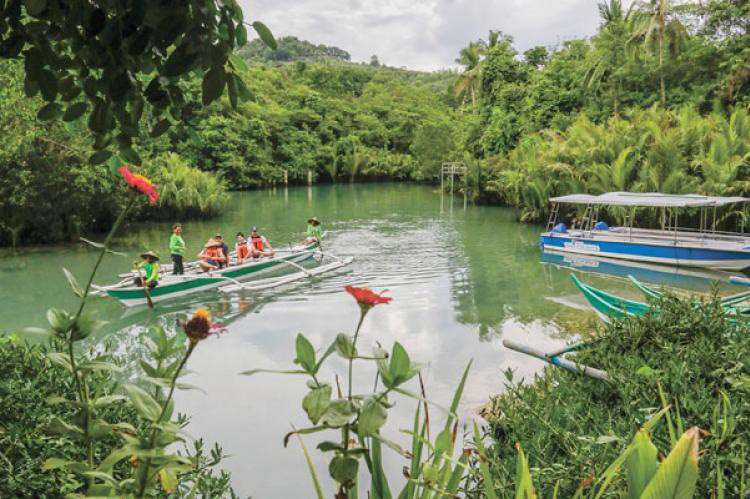 CEBU. Aloguinsan's Bojo River Cruise is recognized, for the third time since 2016, as one of 100 sustainable destinations in the entire world. (SunStar File Photo)

TOURISM stakeholders in Cebu lauded the sustainability efforts of the municipality of Aloguinsan after the Bojo River Cruise once again made it to the Top 100 Global Sustainable Destinations for three consecutive years since 2016.

The award, given by Green Destinations, marked a three-peat win for Bojo River Cruise, which has been included among the Top 100 Global Sustainable Destinations for 2016, 2017 and 2018.

Other Philippine destinations—Lio Tourism Estate (El Nido, Palawan) and San Carlos City (Negros Occidental)—also made it to the Top 100 list for 2018. The list celebrates the efforts of tourism destinations to promote responsible and sustainable tourism..

Carlo Suarez, president of the Hotel, Resort and Restaurant Association of Cebu, said the success story of the Bojo River Cruise could be the model that the Department of Tourism (DOT) could look into in promoting eco-tourism and farm tourism activities in the country.

“Kudos to the municipality of Aloguinsan and its constituents for keeping the crown in the south for promoting eco-tourism. You are a good example for the rest of the municipalities in Cebu,” said Suarez.

For Cebu Alliance of Tour Operations Specialists (Catos) president Alice Queblatin, Cebu should be proud of the Bojo River Cruise.

“It has reaped awards here and abroad for the past years as a successful eco-tourism initiative ‘by the people, for the people.’ It is a model of productive collaboration among three sectors: local government, community and industry,” she said.

She added that Catos is aggressive in marketing the tour to make it sustainable.

Aldeguer said the local government unit (LGU) of Aloguinsan and tourism consultant Joselito “Boboi” Costas should be lauded for the identification and transformation of the Bojo River Cruise project.

“I still remember when they had just started their vision for an eco-friendly and sustainable tourism project. Because of proper execution, they are now enjoying the fruits of their effort. We need more carefully planned tourism projects from the LGUs. Many that we see around the country are crudely executed and poorly run,” said Aldeguer.

The win came on the heels of Costas’ announcement that he is leaving the Cebu Provincial Tourism Office.

Suarez said he was saddened to hear of his resignation.

“He has made a mark in the tourism industry for the north and south. It will be a big challenge to who will take over his place,” he said.

Costas, in his Facebook account on Wednesday, March 6, announced that he is signing off from public office.

“My greatest discovery is that while my three years in government service (four actually, consulting included) may have made a dent in the lives of others, it has given my life new meaning. Signing off from public service,” said Costas.

He also thanked the Sugbu Turismo team for “the awesome exchanges of ideas and the lessons he learned from them.”

Bojo, Aloguinsan, Cebu is a fishing village in the midwest which is within the biggest protected marine area in the Philippines.

The destination won because “it puts great effort in protecting the nature by implementing various projects, such as mangrove preservation and restoration projects.”

The town also developed eco-tourism and created a local community initiative, the Bojo River Cruise, that received an award for Best Community-based Tourism Initiative in Asia-Pacific in the 2015 UN Tourism Inspire Awards.

Moreover, the Bojo Aloguinsan Ecotourism Association (Baetas), which runs the river cruise along the Bojo River, is committed to sustainable consumption and production.

It is guided by the non-extractive, non-consumptive philosophy. Its mission is to protect the river and Tañon Strait, attract tourists, and earn supplemental income.

Baetas won the Asean Tourism Award in the community-based category in 2016.

In past interviews, Costas said their greatest accomplishment is that they were able to radiate to the LGUs from Luzon to Mindanao that sustainable tourism can be done.

“Bojo River is now a familiar benchmark destination for LGUs on eco-tourism development,” he said.

With the help of the local government, trade and tourism government agencies, and local eco-cultural organizations, the group developed Bojo River into an eco-tourism asset and a livelihood resource.

The group aims to highlight success stories and exchange good practices to make all destinations more sustainable and better for local communities and travelers.