Numbers ‘decline’ in rallies due to fear of red-tagging 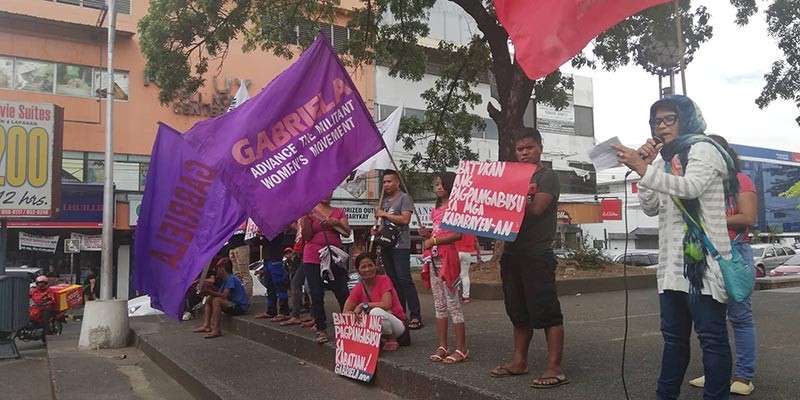 CAGAYAN DE ORO. Members of Gabriela progressive organization, together with its allied organizations and supporters, gather in Divisiora, Cagayan de Oro City to observe the International Women’s Day every March 8. However, their attendance are noticeably in decline as compared in the previous years due to the recent red-tagging on activists being branded as communists. (PJ Orias)

AS THE Women’s group Gabriela Women’s Party and Hustisya Northern Mindanao, held a protest action on Friday, March 8, to observe the International Women’s Day, it can be noticed that there were few who attended the event.

Father Roland Abeno, chair of the Movement Against Tyranny-Northern Mindanao, who also joined the peaceful rally in Divisoria in Cagayan de Oro City, admitted that there was indeed a decline because some member activists feared of being accused red-tagged, or accused as a communist rebel.

“It somehow affected (the attendance) because there were leaders in the (progressive) organizations who were arrested, and the recent red-tagging of activists (made it worse),” he said.

“But this won’t stop us, even there is fear. We can’t be stopped in shouting to end the abuses and the threats, especially as we celebrate Women’s Day, which included those women who were jailed because they just brought up the issues of the poor and the oppressed in our society,” he added.

The observation is not only centered on women empowerment and to all women but also to men who became “political prisoners.”

The groups cited the “dire human rights situation across the country whose victims are women who bravely stood up against the anti-people policies of the government,” as Winifreda Udarbe said it, spokesperson of the Hustiya-Northern Mindanao, an organization of families of the victims of the said human rights violations.

“We are alarmed by the rising cases of illegal arrests and trumped-up charges of leaders of farmers and Lumads who fought for land rights. My husband, Ireneo Udarbe, and his colleague, Jomorito Goaynon, are both human rights defenders,” she said.

Winefreda is the wife of Ireneo Udarbe, chairperson of the Kilusang Magbubukid ng Pilipinas (KMP) in Northern Mindanao. He was arrested along with lumad leader Jomorito Goaynon earlier this year, for attempted and frustrated murder.

But his wife insisted that both are human rights defenders, not terrorists.

“They are not terrorists, as the government, through its armed forces and courts, so unjustly accuse. They do not carry guns and bombs that the military and police maliciously planted during their arrests. Their weapons are their just calls, their placards, and their principles,” she added.

Now, Winifreda is joining protest actions to celebrate brave women whose lives, she said, are now in peril due to government crackdown against the rebels.

“Women who call for genuine agrarian reform for the farmers, for labor rights for the workers and employees, for right to self-determination and ancestral domain for the Lumads, for sovereignty against incursion by China and the US of our national patrimony, and for quality and accessible social services are demonized and branded as terrorist. They are not our enemies. They are part of our efforts to build a just and humane society where we can all live freely without the worry of hunger and poverty. And yet, they are the target of the government’s attacks,” she added.

“Women are the light. We are living in dark times amidst attacks on human rights. But we will continue to carry the torch end all forms of abuse against women’s rights and that of the people. This includes the extrajudicial killings, threat, harassment and intimidation, abductions, illegal arrests and trumped-up charges, forced surrenders and forced evacuations of our children, our husbands, our neighbors and our brave women. We will not let the darkness win,” Udarbe said.

The protesters also called for the lifting of martial law in Mindanao, the release of human rights defenders charged with false cases, and to put a stop to all forms of violence against women and children.

The group also called for the resumption of the peace talks as a “more effective action to address the root causes of rebellion, and not the militaristic counter-insurgency approach of the government that victimizes civilians and legitimate voices of dissent.”