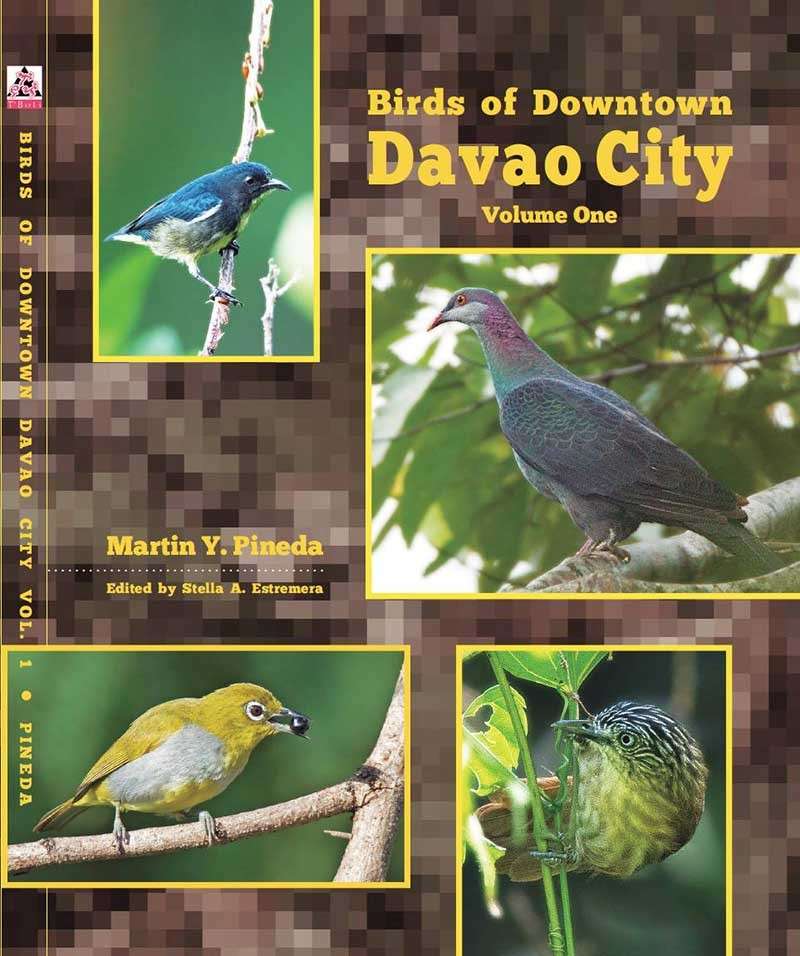 First ever. The covers of the first books published on Davao City’s wild birds. (Stella A. Estremera) 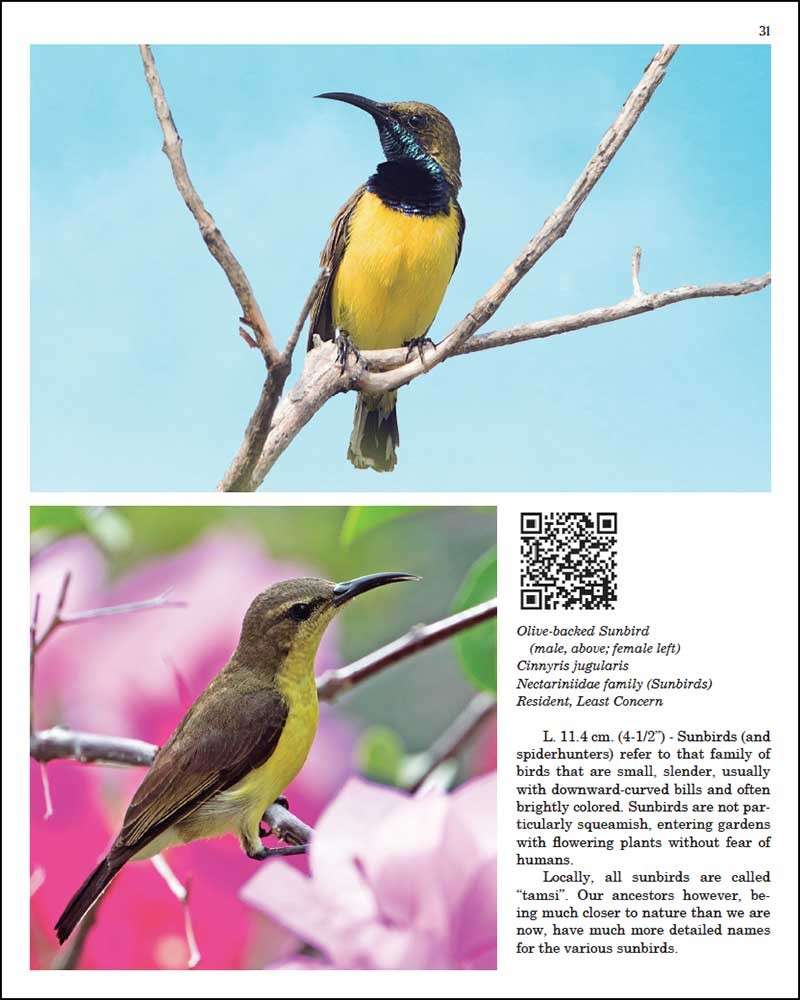 Information-packed. The book features QR codes for each species, allowing readers to listen to the specific species’ sound. It also shows readers that there is more than one kind of “tamsi”. (Stella A. Estremera) 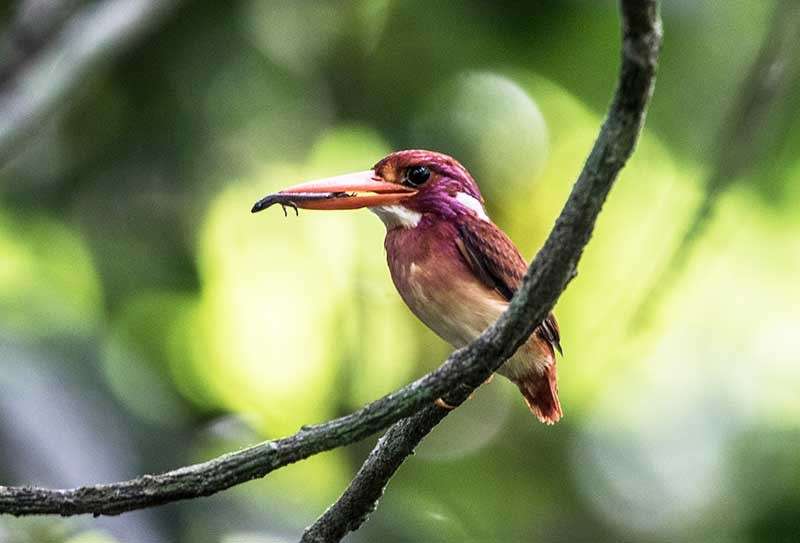 More than just blue. While Dabawenyos may think of blue and white birds when describing a kingfisher, kingfishers are not all blue and white, like this South Philippine Dwarf Kingfisher. (Martin Pineda) 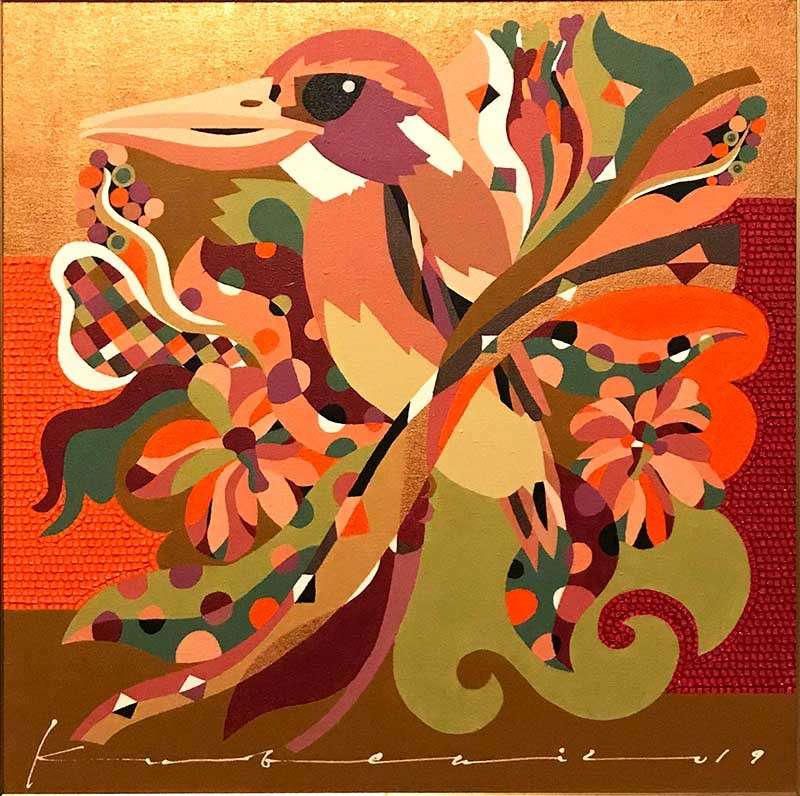 A TWO-VOLUME full-color books on more than 100 wild birds of Davao City will be launched on March 13, 2019 along with a joint photo and painting exhibit in time for Araw ng Dabaw at the Abreeza Ayala Malls in Davao City.

Written by property development company owner, geologist, and bird photographer Martin Y. Pineda, the books entitled “Birds of Downtown Davao City” and “Birds of Davao City Beyond Downtown” feature stories on where to watch for these birds in Davao City and has a QR Code for each featured bird. By pointing a smartphone camera on the QR Code, the reader will be brought to the specific bird’s recordings on the xeno-canto.org website, allowing readers to become familiar with the species’ call. The website xeno-canto.org is a repository of bird call recordings from all over the world.

The book launch will be accompanied by a one-week exhibit at Abreeza entitled “The Birds of Davao City” featuring photos by Pineda and paintings by Mindanao artist Rey Mudjahid “Kublai” P. Millan, who rendered eight paintings based on eight of Pineda’s photos. Excerpts from the books will also be displayed, making it an educational exhibit.

The books were produced following prodding of Pineda’s birder-friends who have been commenting on his bird photos he posts on his Facebook account.

To focus on Davao City birds was the suggestion of Millan, who pointed out that there is no single book yet that tackles the wild birds of Davao City, making this a groundbreaking publication. This is also the first bird book that harnesses technology through the use of QR codes, delivering a whole package of information for each species featured in concise bits.

Birders from different organizations from all over are joining the launch.

The opening program on March 13 will have a short talks by the author on the books, Alex Tiongco, president of the Birders Without Borders Philippines and Raptorwatch Network Phils., who will give an introduction to birding and wild birds, Philippine Eagle Foundation executive director Dennis I. Salvador who will talk on preserving pockets of nature in the city, and Millan who will walk the guests through the inspirations that brought forth the bird paintings.

Through the two books, readers can appreciate the different places in Davao City more and make them realize that retaining green spaces within the urban centers not only cool the environment but also allows the colorful birds to flourish.

From the ubiquitous mayang simbahan (Eurasian Tree Sparrow) and mayang bungol (Chestnut Munia), readers are introduced to bright colored birds like the Coppersmith Barbet and show them that there is more than one species of tamsi (Sunbirds). The books are eye-openers, especially for city slickers who only see small brown birds everywhere and think these are all maya.

The books are edited and designed by Stella A. Estremera and published by Washington USA-based T’boli Publishing & Distribution.