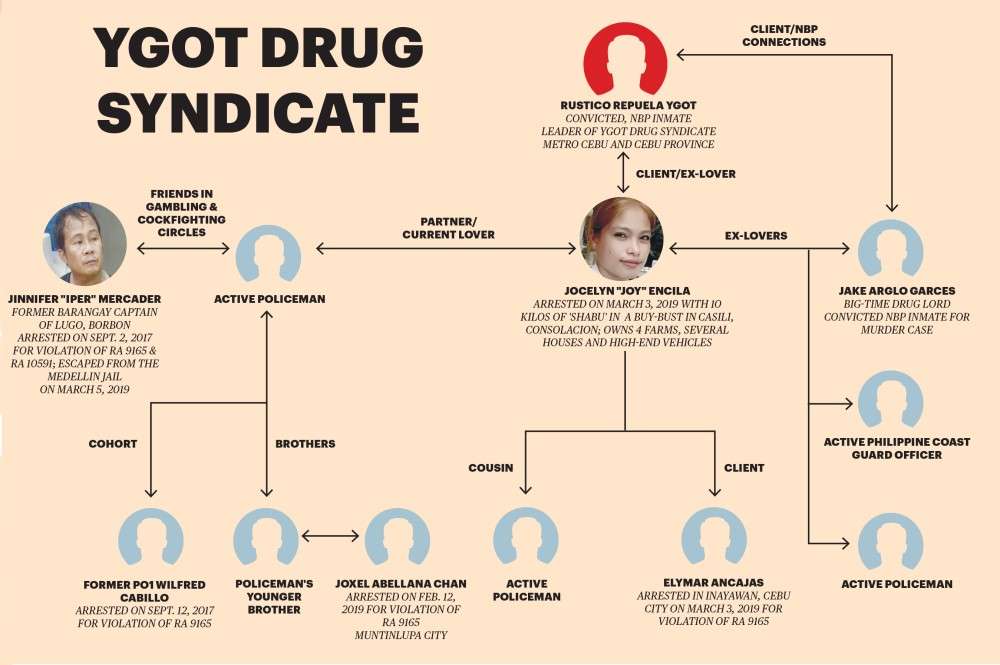 DRUG MATRIX. The Regional Intelligence Division 7 releases a drug matrix that shows Rustico Ygot as the main supplier of illegal drugs. He deals with Jocelyn Encila only. Encila distributes the supply to Elymar Ancajas and a policeman based in Bohol but who comes from the drug-infested Barangay Tangke in Talisay City. (SunStar Graphics)

JOCELYN “Joy” Encila, the woman local police said is Cebu’s drug queen, had both drug lords and policemen as lovers, sometimes simultaneously, other times one after the other.

She met some of them in the course of visiting in jail her previous years-long lover, who is the father of her 13-year-old daughter.

She also had a member of the Philippine Coast Guard Cebu Station as a lover, with whom she has two children.

Information about Encila came from the Regional Intelligence Division (RID) 7, which had placed Encila under surveillance for months.

The ties that bind Encila, who is in her early 30s, to the drug world came to fore after her arrest on March 4 in a buy-bust in Consolacion, Cebu. About P190 million of shabu were seized in separate busts on that day.

She had two lovers who were jail-based drug lords, two policemen on active service and a Coast Guard member.

She had a lover of more than 13 years whom she visited at the New Bilibid Prison (NBP) in Muntinlupa City in Luzon. This man, Jake Arglo Garces, who is from Lamac, Consolacion, is serving time for murder. Garces is the father of her teenager.

Garces was also involved in illegal drugs, and considered by police to be a big-time drug dealer. He was jailed not for the drugs but for the murder of a male dancer of a gay bar in Cebu City in April 2010. Jealousy drove him to shoot to death Gabriel Dayondon, 23.

While Garces was in jail, Encila also was in a relationship with “Coast Guard guy” with whom she has two children.

In one visit to Garces at the NBP, Encila met Rustico Repuela Ygot, leader of a drug syndicate operating in Cebu that has links to a big drug supplier in the Philippines.

Encila and Ygot became lovers. Encila occasionally slept in Ygot’s cell. Whether the respective cells of Ygot and Garces were near each other or far apart, the RID 7 report did not say.

From then on, Ygot’s drug transactions were done through Encila.

While Encila was in a relationship with Ygot, she met a policeman who then had a rank of Staff Sergeant.

“Staff Sergeant” was assigned to the Cebu City Police Office (CCPO). He, too, became her lover and was now her protector.

Not long after this stage in her love life, she met another policeman who had a rank higher than Staff Sergeant.

Corporal became her lover. too.

But Staff Sergeant set aside hierarchy when he found out about Encila and Corporal’s relationship. The confrontation between Encila’s police lovers would have led to a bloody shootout had there been no intervention from cooler heads.

Corporal was good friends with Jinnifer Mercader, the former barangay captain of Lugo, Borbon, Cebu with a shady past.

Mercader, 42, was arrested on Sept. 2, 2017 in his house in Barangay Cahel in Borbon for possession of illegal firearms. Drugs were also found in his house. He was sent to the Medellin District Jail nearby but bolted last week, on March 5. He had confessed to being a hit man.

The drugs found in Mercader’s house could have been supplied by Encila, police said.

The drug matrix released by RID 7 to journalists shows Ygot as the main supplier and he deals with Encila only.

Encila distributes the supply to a policeman who is based in Bohol but who comes from the drug-infested Barangay Tangke in Talisay City, and to Elymar Ancajas.

Bohol Policeman, on the other hand, supplies drugs to Encila’s younger sister Janelyn and her cousin who lives in Duljo-Fatima, Cebu City.

Janelyn was shot dead on March 6 in Labogon, Mandaue City by an unidentified man. The man pulled her out of the taxi and shot her multiple times.

PID 7 Chief Remus Medina said Encila has many lovers and his team will only weed out those who have direct involvement in illegal drugs.

Bohol Policeman has been unaccounted for after law enforcers searched his house, Medina said. Corporal allegedly owns two big houses in the Cebu towns of Compostela and Consolacion. Encila said she owns one of the two.

Encila lives in a private subdivision in Barangay Casili, Consolacion. She also is said to own four farms. (MPS FROM REPORTS OF AYB OF SUPERBALITA CEBU)