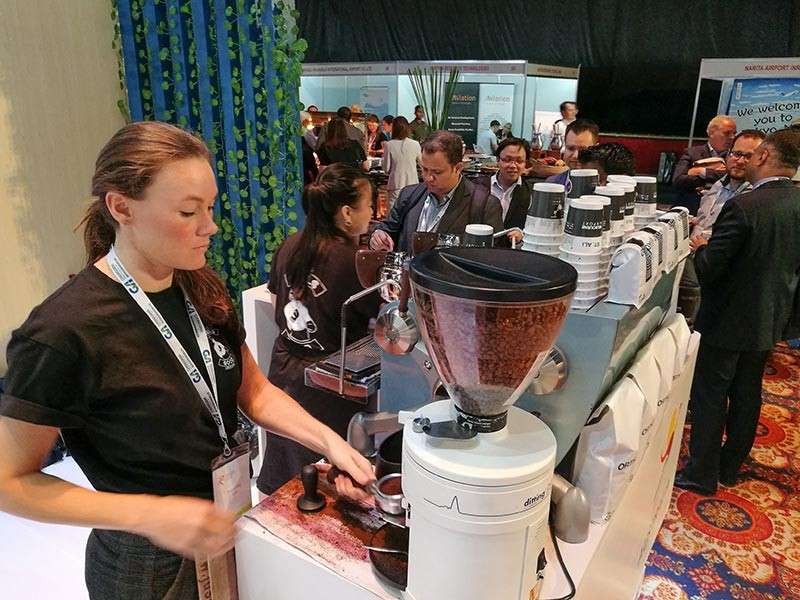 TIME FOR A BREAK. The St. Ali coffee being served by the Melbourne Airport booth at the Routes Asia 2019 is a welcome sight.(SunStar photo / Arni Aclao) 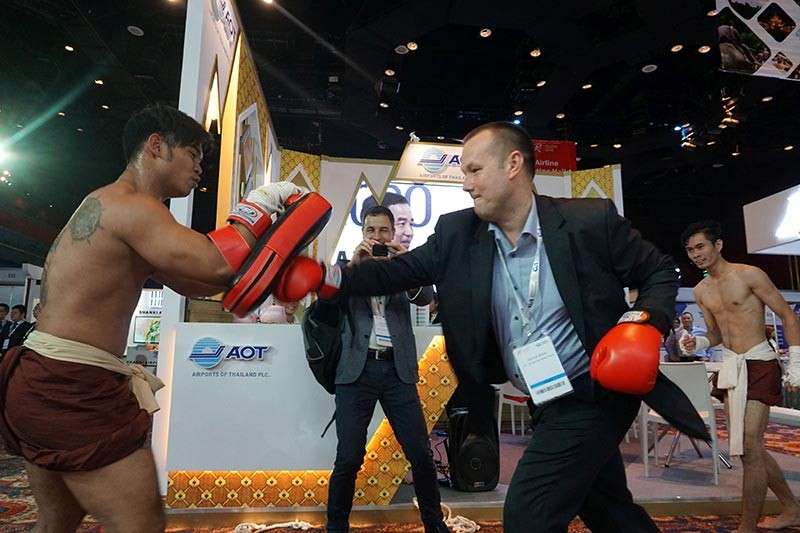 TIME FOR A BREAK. A delegate of the Routes Asia 2019 (above) tries his hand at Muay Thai at the Airports of Thailand booth. (SunStar photo / Alex Badayos)

WHEN delegates need a break from the serious discussions on the future of aviation in Asia, they only have to step out of the conference hall and visit the booths outside.

This year’s Routes Asia 2019 exhibits featured coffee and cultural dances, as airline companies and airports showcased the best they can offer.

Melbourne Airport from Australia brought in their Orthodox Expresso blend coffee of the St. Ali brand that tickled the noses of delegates who lined up eagerly for a cup.

“The reason we brought the coffee here is because we want to showcase Melbourne as a destination as well as an airport. We work very closely with the tourism board because we are the coffee capital and sporting and events capital. We love to showcase what we’re good at, which is coffee,” Nicky Eakins, marketing manager for aviation of the Melbourne airport, told SunStar Cebu.

Melbourne, Eakins said, is projected to become Australasia’s largest city by 2030 and their airport has the strongest domestic and international growth.

The presentation earned the loudest applause in the grand ballroom of the Waterfront Hotel in Cebu City, a breath of fresh air from the heavy business-driven atmosphere of the route development event.

“There’s very good feedback and interest. And we have a lot of popular tourist destinations,” Paninee Chaisrakeo, director for business development and marketing of the company, said.

The Mactan Cebu International Airport (MCIA) also received many guests from all over the world wanting to try the crispy lechon and join the chocolate-making demonstration at their booth, which was one of the largest in the event.

“We designed it according to the distinguishing features of Terminal 1 for domestic and Terminal 2 for international. The tables are also shaped like an airplane,” MCIA general manager Steve Dicdican said.