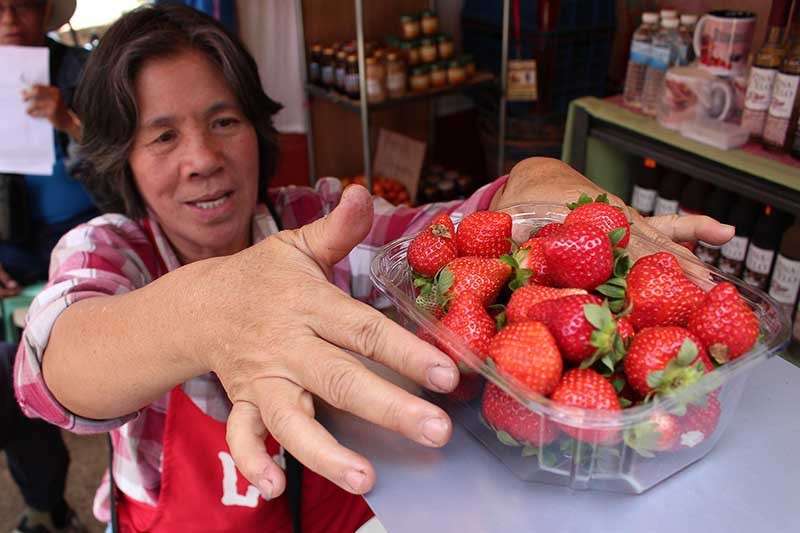 BENGUET. Marina Salipio from Lubas, La Trinidad packs a half-kilo of strawberries to be sold for P100. (Photo by Jean Nicole Cortes)

WITH the 2019 Strawberry Festival now in full swing, authorities in La Trinidad continue to prepare for the influx of tourists.

"We have augmentations from Benguet Provincial Police Office who gave one team in advance for police visibility at the trade fare. We requested for additional police at the strawberry farm and for the duration of the Strawberry festival," Banglayan said.

The police will focus on anti-criminality efforts and providing traffic assistance for the month-long celebration, he added.

The top police official in the province also called on visitors during the festival to keep their personal belongings and gadgets safe.

To date, authorities are conducting school-to-school visitation while waiting for the upcoming highlights of the Strawberry parade, as part of their information education campaign.

Banglayan said their information drive would target the youth, who are most vulnerable to pickpockets.

A temporary traffic scheme was earlier released for the celebration of the annual Strawberry Festival on March 18 to 23.

Mayor Romeo Salda signed Memorandum Order No. 03 s.2019, directing temporary traffic routes in view of the festival activities in anticipation of the influx of tourists in Benguet’s capital town.

“In order to ensure the safety and convenience of the participants, tourists and visitors for the aforementioned events, there arises the need to reroute traffic along roads where said activities are held,” the memorandum reads.

On March 18, the southbound rightmost lane of Halsema Highway will be closed to traffic from 6:00 to 9:30 a.m. for the civic parade from the COA area to the municipal hall.

The two remaining lanes will be open to two-way traffic.

On March 23, all lanes will be closed to traffic from 6:30 a.m. until 12 noon to give way for drum and lyre, street dancing and non-motorized float competition from COA to the municipal hall.

In view of the upcoming celebration, Salda also lifted the number coding scheme in the valley from March 18 to 22 to provide better mobility to visitors and stakeholders.

March 18 has been declared as a special non-working holiday in the municipality.