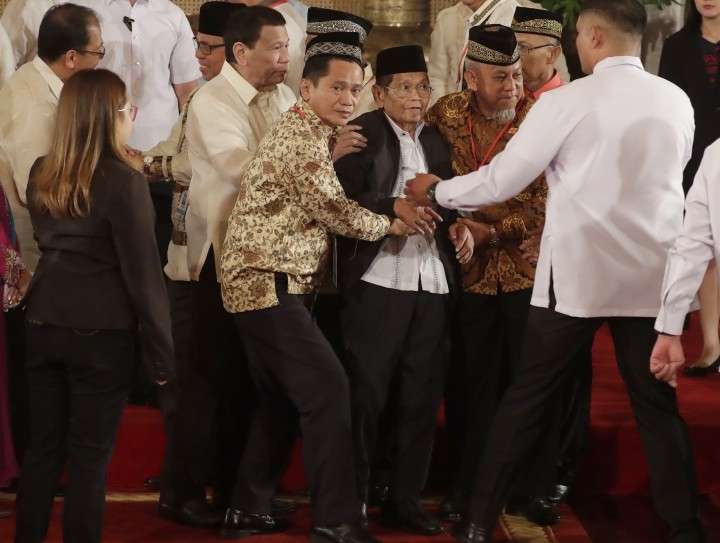 MANILA. President Rodrigo Duterte (third from left) helps in assisting Ghazali Jaafar, vice-chair for Political Affairs and Chair of the Bangsamoro Transition Commission, after briefly falling following oath-taking ceremony for the creation of the Bangsamoro Transition Authority (BTA) at the Presidential Palace in Manila on February 22, 2019. (AP)

Philippine National Police (PNP) spokesperson Colonel Bernard Banac said based on report from the Davao City Police Office, Jafaar, 75, was pronounced dead at 1:39 a.m. at the Metro Davao Medical and Research Center due to several complications in the kidney, heart and abdomen.

Jaafar underwent angioplasty last year in order to improve the blood flow on his heart.

Jaafar was assigned as chief of the Bangsamoro Transition Commission, which drafted the Bangsamoro Organic Law (BOL) for the creation of the new Bangsamoro Autonomous Region in Muslim Mindanao (Barmm).

He was also a member of the Bangsamoro Transition Authority (BTA), which will look over the Barmm transition.

His last public appearance was at the oath-taking of BTA members held at Palace on February 22.

The PNP and Malacañang condoled Wednesday with the family of Jaafar.

"The Palace takes this opportunity to send our heartfelt condolences to the family members and friends of Mr. Jaafar. He has fought many battles for peace and may Allah grant him a place in Jannah (Paradise)," he added.

“The PNP expresses its deepest sympathy and condolence to the family for the death of Vice Chair Ghazali Jaafar, him being a partner of the government in peace-building in Mindanao, and a pillar of the Bangsamoro Transition Authority,” said Banac.

Panelo acknowledged Jaafar as a "warrior of peace."

In a separate statement, Presidential Adviser on Peace Process Carlito Galvez Jr. branded Jaafar as a "great Moro leader" who showed "determination in leading the Moro people through the passage and eventual ratification of the Bangsamoro Organic Law."

"We will never forget that despite his health condition, Jaafar went the extra mile to join several campaign rallies to push for the realization of the Moro people's aspiration for a genuine and meaningful autonomy," Galvez said.

"Jaafar selflessly dedicated and devoted his life for others. Truly, he is a man of peace," he added.

Professor Raby Angkal, the family's spokesperson, said the remains of the Moro revolutionary leader will be brought home to Sitio Tapuken, Barangay Pigcalagan, Sultan Kudarat, Maguindanao, where he will be buried based on Muslim rites. (SunStar Philippines)