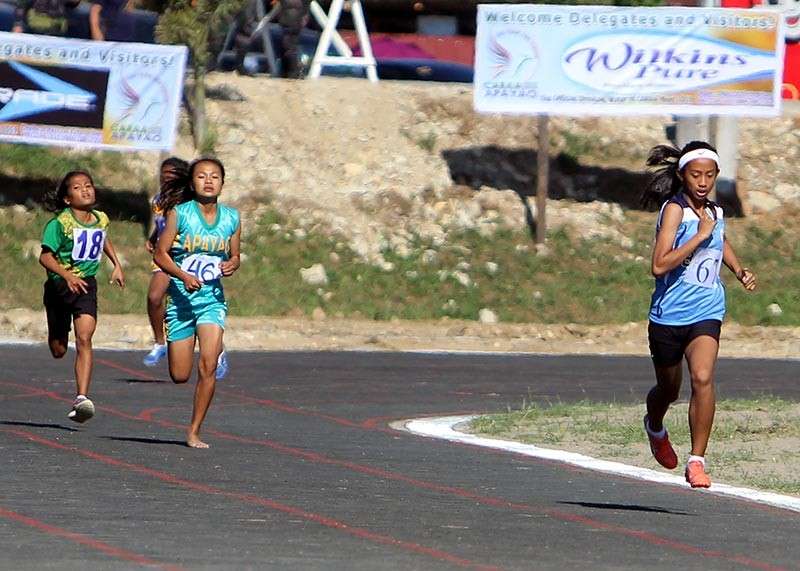 BAGUIO. Baguio City’s Lieshen Kate Masangkay leads other runner during the elementary girls 400 meter dash of the CARAA meet held earlier this month en route to winning the gold medal. Masangkay is expected to see action in the Luzon qualifying leg of the Batang Pinoy which kicks of March 16 in Ilagan, Isabela. (Photo by Roderick Osis)

BAGUIO athletes will be marked anew as the Luzon qualifying leg of the Batang Pinoy kicks of March 16 in Ilagan, Isabela.

Fresh from defending the Caraa title just few weeks ago in Apayao, the Summer Capital bets are off to Isabela as a favorite after romping away with the national title last year when it hosted the almost weeklong event spearheaded by the Philippine Sports Commission.

Gaudencio Gonzales, Baguio City sports coordinator, said the city is sending some 450 athletes and coaches for the qualifying leg where a total of 19 sports will be played.

Almost P15 million worth of sports equipment from PSC will be given to the local government unit of Ilagan, Isabela as hosts for Batang Pinoy.

Chairman William Ramirez, during an earlier signing of memorandum of agreement said as host LGUs cooperate with PSC in the staging of Batang Pinoy, the PSC is also eager to help them produce home grown talents by supporting their grassroots sports programs.

The Batang Pinoy was established through EO No. 44 which was signed by then President Joseph Estrada on Dec. 2, 1998.