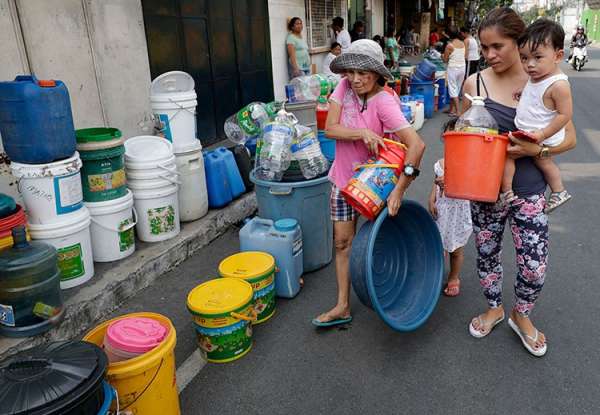 MANILA. Residents line up with containers as they wait for water trucks in Mandaluyong City on Wednesday, March 13, 2019. (AP)

MALACAÑANG is not buying the claim of Ayala-led water concessionaire Manila Water that it does not have enough water supply.

Speaking to Palace reporters on Thursday, March 14, Presidential Spokesperson Salvador Panelo was convinced that there are "inefficiency" and "mismanagement" on the part of Manila Water.

Panelo noted that water shortage was unlikely possible, since one of the main sources of the water concessionaire's supply is Angat Dam.

As of March 14, Angat Dam is at 199.63 meters, below the normal water level but not reaching the critical level of 195 meters.

To note, water concessionaire Maynilad is operating normally and it draws from the same water from Angat Dam.

"Eh kung totoo na ang Angat Dam is punung-puno at lahat naman ng nanggagaling doon, hindi nga totoo (If it's true that there's enough water supply from Angat Dam, it's true that there is no shortage). So something is wrong with the efficiency in distributing, as well as the quotas of the share," Panelo said.

Panelo, nevertheless, said the government is conducting an investigation to determine the reasons for the water shortage in Metro Manila.

He added that Manila Water would be held accountable, if it is proven to have committed negligence to address the water needs of people from the metropolis.

"We're precisely investigating to know exactly what is happening or what's the cause of the lack of water supply," the Palace official said. "Syempre, kung sila ang may kasalanan (Of course, if they're at fault, we'll make sure they'll be held accountable.)

On Wednesday, March 13, Cabinet Secretary Karlo Nograles said there was an effort to push for the issuance of an executive order that will allow government to properly address water issues in the country. (SunStar Philippines)