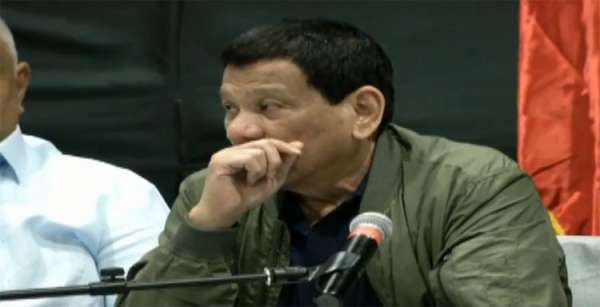 Duterte made public the names of the so-called "narco-politicians" during a command conference held in Davao City Thursday night.

Some of the alleged narco-politicians mentioned by Duterte are Representatives Jesus Celeste (Pangasinan), Jeffrey Khonghun (Zambales), and Vicente Veloso (Leyte).

The names of mayors who allegedly have links to illegal drugs are as follows:

He also named Montasser Sabal, former mayor of Talitay, Maguindanao, as well as Rommel Ayuson, board member of Rizal province, as among those listed in the narco-list.

"Since my assumption in 2016, I have committed to eradicate the drug problem. I have done that. My decision to unmask these drug personalities was anchored on my trust in the government agencies who have vetted and validated the narco-list," the President said in his speech.

"The Department of the Interior and Local Government (DILG) has filed administrative cases against them, local officials today, March 14, 2019, at the Office of the Ombudsman," he added.

In a statement, the DILG noted that 46 incumbent government officials are facing complaints before the Office of the Ombudsman for their alleged involvement in illegal drug trade.

Duterte said the results of the respective investigations conducted by the Anti-Money Laundering Council and the Presidential Corruption Commission would be used for the filing of "airtight cases" against the narco-politicians.

"Remember, a public office is a public trust. An official's right to privacy is not absolute and there is a compelling reason to prioritize the interest of the state and the people," Duterte said.

"As your president, my ultimate concern is the pursuit of others in government and the welfare of the Filipino people. My administration assures you of my dedication to change the lives of Filipinos now, not tomorrow," he added.

Around 82 politicians supposedly have links to illegal drugs, as of March 5, according to the data from the Philippine Drug Enforcement Agency.

Releasing the names of the politicians involved in illegal drugs was meant to guide voters in choosing the right candidates in the coming midterm elections. (SunStar Philippines)