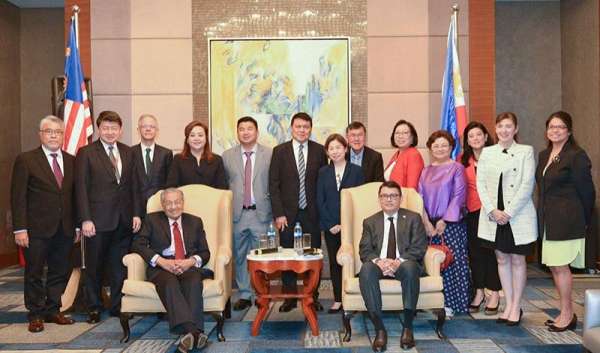 Mahathir was on an official visit to the Philippines upon the invitation of President Rodrigo Duterte to discuss political, economic and social cooperation between the two countries.

The discussion revolved around the economic relations of Malaysia and the Philippines through infrastructure investments, and exchange of goods and services between the two countries.

Mahathir was open to the prospect.

“If there are possibilities to invest in the Philippines, as there are in other parts of the world, we will invest. But we are also hoping that we can stardardize conditions that can lead to investment. Some of us practically inhibit investments outside in favor of domestic. Some are in favor of foreign direct investments rather than local. But I think, if we can standardize the procedures, laws and rules for investment, there will be more investments between us.”

Sandy Prieto-Romualdez, president of the Philippine Daily Inquirer, asked Mahathir on his hopes for Asean. The 93-year-old leader said Asean must have fast economic growth which then will lead to the growth of the region.

The topic on trade and investments was opened by Filinvest Land president and chief executive officer Josephine Gotianun-Yap. Mahathir agreed that foreign direct investments must be encouraged between the two countries.

“If we have common systems, common laws, common rules for trading, the ease of trading will be enhanced, and therefore trade will grow. Following trade, there will be investments. Foreign direct investment through each country. That also will contribute to our growth. So if you ask me what we need to do now, it is to look into making it less difficult for trade and for movement of capital in the Asean region,” Mahathir said. (PR)