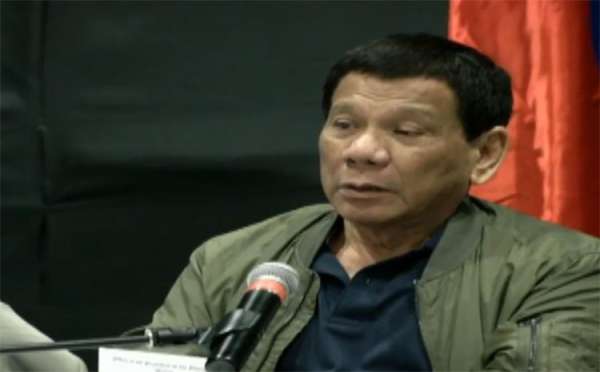 DAVAO. President Rodrigo Duterte announces the names of politicians who were included in the narco-list. (Screenshot from PTV)

They said their inclusion may be a product of an irresponsible investigation or may be done by their political rivals. A lawmaker also said that Duterte may be impeached for releasing the list, stressing it is a violation of the Constitution.

A total of 46 officials, including 35 mayors, seven vice-mayors, one provincial board member, and three members of the House of Representatives are on the list.

They are all seeking re-election in the May 13 midterm polls.

In a television interview, Veloso, who is again running for representative of Leyte, said he is planning to initiate a congressional investigation to find out why and how he was included in the list.

He said his inclusion in the narco-list has damaged his reputation.

He said he will also file criminal charges against officials of the Philippine National Police (PNP), Philippine Drug Enforcement Agency (PDEA), and the Department of the Interior and Local Government (DILG), who are responsible for the said list, if it will be proven that there was a lapse in the verification process.

"I have been unduly injured by this list and those responsible for the inclusion of my name in that list must be sued criminally, must be penalized criminally," Veloso said.

"Itong nag-file sila ng complaint sa Ombudsman, it's a smokescreen para hindi sila ma-libel...We should have waited for probable cause ng Ombudsman. They did not wait for that so that is highly irregular, that is illegal," he added.

Right after Duterte made the announcement, the DILG said in a statement that it filed charges of grave misconduct, conduct prejudicial to the best interest of the service, conduct unbecoming of a public officer, and gross neglect of duty against the politicians on the list before the Office of the Ombudsman.

Veloso, however, did not take the release of the list against Duterte.

“He is just like a father doing what his children asked him to do. He is just doing his work. He said that (the list) is verified but I am far from that,” he said.

He said his main concern now is his and his family’s security, as he may already be a subject of the PNP’s Oplan Tokhang.

The Oplan Tokhang, where cops are visiting houses of drug personalities to urge them to mend their ways, has been in the bad light over the killing of alleged drug personalities and the abuse of some erring police operatives conducting such operations.

Veloso said he will continue his fight despite his family urging him to withdraw from the 2019 polls.

Alcala, for his part, is pointing at House Minority Leader, Quezon Representative Danilo Suarez, as the one responsible for his inclusion in the list.

He said Suarez earlier threatened to release documents against him if he will not be able to stop a broadcaster from his tirades against the lawmaker.

"Alam ko na on my part na sila ang behind dito. Ginagawan nila ng paraan para tayo ay ma-link dito. Isang malakas na puwersa dito sa lalawigan at ito ang ginagawa nila (I know that they were behind this. They're finding a way to link us to illegal drugs. They have power and they're doing this)," he said.

"The allegation is irresponsible, I have nothing to do with it," he added.

Violago and Khonghun also believe that their political opponents are behind their inclusion in the list.

Violago, who was also included in the narco-lit released by Duterte in 2016, noted that he never got involved in illegal drugs and he is supporting Duterte’s war on drugs.

Agustin of Tarlac said he did not expect his inclusion in the list, as investigators have already cleared of illegal drugs involvement in 2017.

Agustin was included in the 2017 narco-list and was stripped off police powers, but he said the PDEA has already cleared him following a verification, which included releasing to authorities his bank records for financial and lifestyle investigation.

He said he is open for a background investigation so he can clear his name.

Rosento, for his part, said most illegal drug transactions in El Nido, Palawan, which is a tourist spot, are usually being done by foreigners, not by the local residents.

Alagos of Culasi town in Antique challenged the government to file criminal raps and prove before the court their involvement in the illegal drug trade.

“I do not know why my name is there. You can ask people here, except my political rivals, and they will vouch that I have no involvement in illegal drugs,” he said, adding politics could be behind his inclusion in the list.

He admitted, though, that his younger brother was once subjected to Oplan Tokhang but he has nothing to do with it.

In a statement, Akbayan Representative Tom Villarin said Duterte may be impeached for releasing the narco-list as the act violates the Constitution, which gives a person the right to due process and presumption of innocence.

“As President of the Republic, Duterte’s powers are not absolute nor can he justify putting the state in order by infringing on an individual’s right to due process and presumption of innocence,” he said.

“This could constitute an impeachable offense for culpable violation of the Constitution... We cannot allow trial by publicity especially coming during an election season where political violence heightens. With the list out, it is now open season for political assassinations. It has now become game for political rivals to assume that death warrants have been served against their opponents,” he added. (SunStar Philippines)