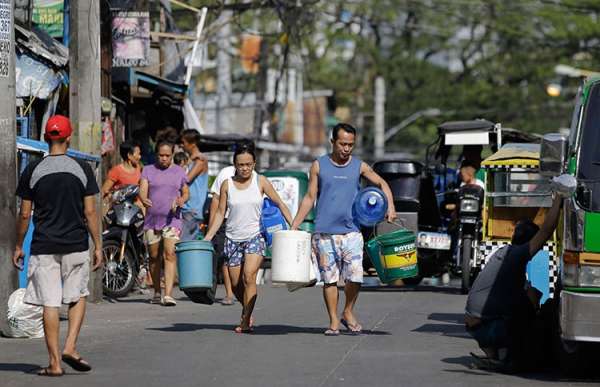 IN A bid to address water crisis in Metro Manila and nearby areas, President Rodrigo Duterte has directed private water concessionaires to release water supply from Angat Dam that will be good for 150 days.

Duterte issued the directive, as he raised worry over the reported water shortage affecting residents in Metro Manila and nearby areas, Presidential Spokesperson Salvador Panelo said in a statement on Friday, March 15.

"The President is aware and concerned of the sufferance of the residents of Metro Manila due the present water crisis," the Palace official said.

"The President is directing the Metropolitan Waterworks and Sewerage System to demand from the Manila Water Company Inc., Maynilad Water Services Inc., and other responsible offices to release water from Angat Dam by noon time today, March 15, good for 150 days," he added.

Panelo said Duterte's order was meant to "supply the affected areas in Metro Manila and deliver, as well as distribute sufficient water to the residents thereof."

On Thursday, March 14, Malacañang said the water crisis being pictured by Manila Water may be untrue, since Angat Dam in Bulacan, one of its water sources, had ample supply.

Malacañang also stressed that the scarcity may be attributed to Manila Water's inefficiency and mismanagement of resources.

As of March 14, Angat Dam is at 199.63 meters, below the normal water level but not reaching the critical level of 195 meters.

Some parts of Manila and other areas from nearby provinces have experienced water shortage when water level at Angat Dam was normal at 199.63 meters and far from the critical mark.

Panelo said Duterte would go after water concessionaires, if they fail to follow his directive.

"Failure to act or comply with this directive, the President will personally go to them and make the responsible officers account for such failure," he said. (SunStar Philippines)