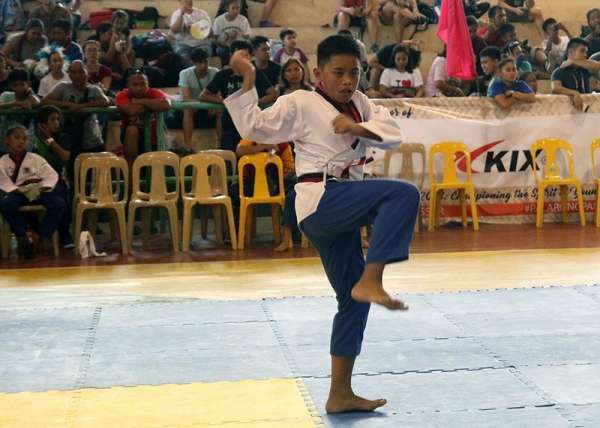 With taekwondo among the 20 sports discipline to be played in Batang Pinoy, Baguio City is once again pinning its hope on combative sports in the weeklong competition for athletes under 15 years old. (SunStar Baguio photo)

THE Luzon leg of the Batang Pinoy goes full throttle Monday, March 18, with Baguio City once again pinning its hope on combative sports and other individual events in the weeklong competition for athletes under 15 years old.

Over 5,000 athletes from 120 local government units trooped to Ilagan City, Isabela for the opening ceremony on Sunday, March 17.

Batang Pinoy National secretariat head Reina Evangelista added that “the PSC working committees are hands-on in accommodating the largest number of delegation among the three qualifiers,” with number of coaches also rounding up to about 1,500.

The PSC’s grassroots sporting event for in-school and out-of-school children 15 years under, is starting on Sunday, March 17 and until March 23, will similarly feature 20 sporting events in 17 different playing venues like its preceding editions in Tagum City and Iloilo City.

Gaudencio Gonzales, city sports coordinator, said the Summer Capital is bent on claiming the over – all title as pins its hopes on combative sports such as taekwondo, karatedo, pencak silat and arnis for the medal haul including archery, athletics and swimming.

The City Government earmarked P1.5 million for the allowance, transportation and uniform of the delegates, higher than the P1.3 million last year.

Fernandez said they will not stop from scraping talents not just from the big cities but the countryside with hopes of producing future gold medalists in international events like the Southeast Asian Games, Asian Games and the Olympics.

“We saw some athletes with potentials in the Mindanao and Visayas legs and we hope to discover more here in Luzon,” said Fernandez.

A total of 1,260 medals—420 golds, 420 silvers and 420 bronzes—will be up for grabs in 20 different sports disciplines that included centerpiece athletics, which is set to unfold on Wednesday, and medal-rich swimming, which unveiled Sunday at the City of Ilagan Sports Complex.

PSC also sent a memo to all Batang Pinoy delegations discouraging the use of plastic bottles during the event.

“Plastics, most especially single-used plastics such as water bottles, are discourages in the conduct of the Luzon Leg of the Batang Pinoy. Please bring your tumblers or reusable plastic bottles as water dispensers will be made available at the different competition venues,” it said.