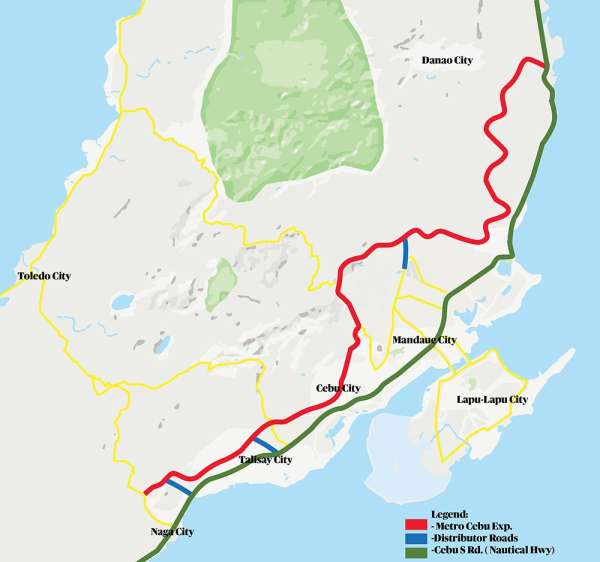 THE Department of Public Works and Highways (DPWH) has started implementing Segment 3 of the Metro Cebu Expressway in Barangay Pangdan in the City of Naga, which it wants to complete before the term of President Rodrigo Duterte ends in 2022.

DPWH 7 Director Edgar Tabacon said the National Economic and Development Authority-Investment Coordinating Council is evaluating the final report of the feasibility study to determine the entire cost for the 73-kilometer project, which stretches from the City of Naga in the south to Danao City in the north.

The project is divided into three segments.

Tabacon said QM Construction won the bidding for the P300-million Segment 3 project. Funding will come from the 2019 annual budget.

Segments 1 and 2 may be implemented through a foreign loan or through a Public-Private Partnership, he said.

However, Tabacon said the P300 million cannot yet be released by the Department of Budget and Management because the President has yet to approve the 2019 General Appropriations Act.

“The civil works is still the continuation of road opening of 40 meters wide and initial concreting of a four-lane road at the length of 1.7 kilometers,” Tabacon said earlier.

Eduardo Sayson of the DPWH 7 planning division said the Metro Cebu Expressway from City of Naga to Danao City will traverse the inner portions of Metro Cebu, parallel to N. Bacalso Ave. in the south and the Cebu North Road in the north.

He said the expressway is expected to meet Metro Cebu’s existing and future traffic demand. It will serve as a north-south backbone highway, providing a seamless traffic flow from City of Naga to Danao City while traversing the slopes of Cebu’s mountain range.

Once completed, the project hopes to ease traffic congestion within Metro Cebu, especially its urban core and central business districts, he added.

In the DPWH website, the agency said “the objective of the project is to improve and enhance Metro Cebu’s seamless east-west, south-north bound inter-modal transport, economic and tourism corridors to meet future transport demand.”

“The Metro Cebu Expressway is a positive development for the City of Naga and to us, commuters,” she said.

Her father, former City of Naga mayor Valdemar Chiong, said a parallel road like the expressway would be of great help, especially during fiesta celebrations and other big events that usually spill on the highway. (S)