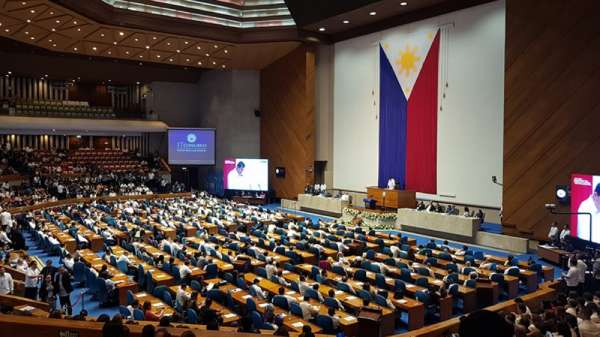 AMID the delayed approval of the proposed P3.757-trillion national budget for 2019, Congress should focus on the interest of the Filipino people and not on its "personal" differences, Malacañang said on Monday, March 18.

Presidential Spokesperson Salvador Panelo made the remark after San Juan City Representative Ronald Zamora revealed that the House of Representatives finally gave in to the Senate's call to withdraw the House "itemized" version of the proposed 2019 budget.

In a press conference, Panelo said it was good to know the Senate and the House of Representatives seemed to have patched up their differences to pave the way for the much-delayed budget for this year.

Panelo said the Palace remained optimistic that Congress would soon transmit its enrolled version of the 2019 national budget to President Rodrigo Duterte's office.

"If that's true, that's good," he said, reacting to Zamora's confirmation that the House of Representatives has agreed to recall its version of the proposed 2019 budget.

"We welcome it. We welcome that they have finally settled their differences so we hope that they would be submitting the enrolled bill; and for the President to go over it and sign it if it conforms with the Constitution," he added.

In a phone interview, Zamora said the House of Representatives would recall its version of the 2019 general appropriations bill (GAB), in an effort to break an impasse triggered by supposed "insertions" in and realignment of the proposed budget.

Zamora said the House of Representatives made the move in "good faith."

"I don't think we should take too long about this [proposed 2019 budget]. It is the economy that is suffering. It is not congressmen. It is not senators," the lawmaker said.

Zamora's statement came after Duterte met with the leaders of the Senate and the House of Representatives to settle the apparent rift between the two chambers that stemmed from the disagreement about the proposed budget.

But in a separate statement, House appropriations committee chairperson Rolando Andaya Jr. said he has yet to be briefed about the supposed recall of the GAB for this year.

"The 2019 GAB was approved in plenary at the House of the Representatives. The ratification of the bicameral conference report on the national budget was also made in plenary. Recall of the 2019 GAB must also be done in plenary session, with majority members of the House in approval," Andaya said.

"No congressman has the authority, without plenary approval, to order the recall of the enrolled form of any bill already transmitted to the Senate," he added.

Panelo said the executive was still optimistic that the senators and congressmen should set aside their conflicts "for the general welfare."

"Well, they should always look at the interest of the people as the primary objective not personal differences with members of each house," he said. (SunStar Philippines)