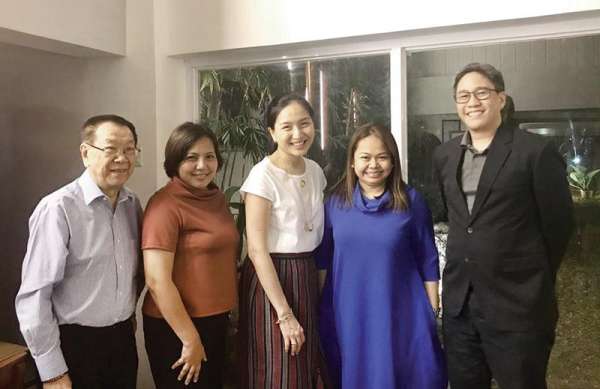 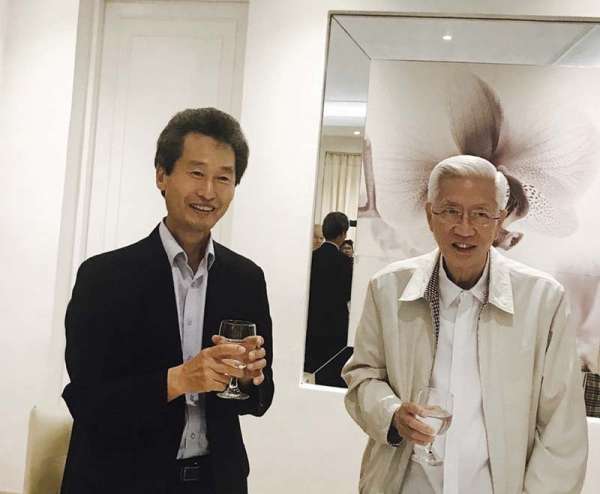 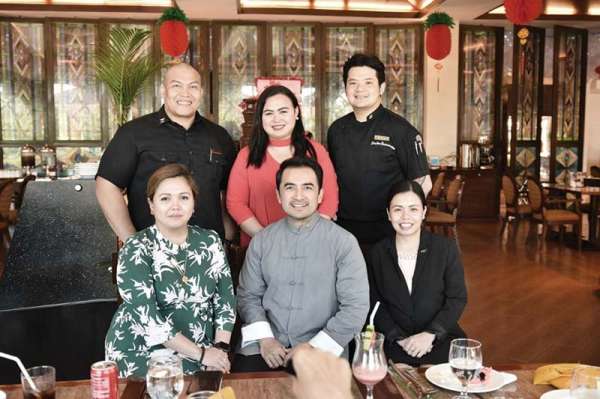 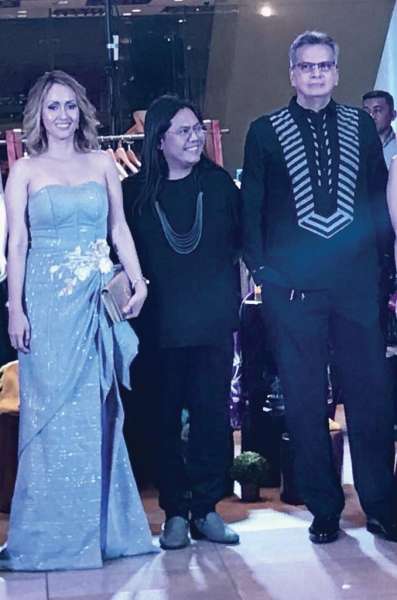 Mano-Mano. At The Gallery of Ayala Center Cebu, during the Mano-Mano art and fashion exhibition, Fashion designer Dexter Alazas flanked by guests of honor Happy Melendres and Lito Gruet.

CONSUL General Oh Sung Young of Korea was honoree at an intimate lunch hosted by Ambassador Frank Benedicto at Tsay Cheng. It was a goodbye get-together for the Consul General who looks forward to retirement in his native land. He promises to come back for a visit someday. Among the attendees at the gathering were Korean Second Secretary and Consul Oh Young Hun, Third Secretary Tae Jaeseok, Consul Ha Sunhi, Israel Honorary Consul Emily Chioson, Kenneth and Lilian Huang, and media friends.

An art and fashion exhibition dubbed “Mano-Mano” unfolded at The Gallery of Ayala Center Cebu a full moon ago. Art pieces done by 15 members of the Cebu Artists Inc. were replicated on Hablon dresses fashioned by top designer Dexter Alazas. The event was truly a novel way of showcasing the collaboration between local art talents in different fields.

In celebration of its 23rd anniversary this month, Cebu Pacific is offering great deals that include a million seats on sale, discounts on inflight meals and baggage allowance as well as discount on hotel rates through its CEB Getaways promo. This was disclosed by Cebu Pacific director of marketing Blessie Cruz during the presentation of “The SuperSeat Fest” to media at Asmara Urban Resort & Lifestyle Village.

Two weeks later Cebu Pacific executives, led by Cebgo president and chief executive officer Xander Lao, were in town for the Routes Asia 2019 conference. Cebu Pacific vice president for marketing and distribution Candice Iyog was one of the panelists. Over a yummy dinner at No.9, they gathered media friends to “shoot the breeze” and talk about the airline’s new destinations in the works.

Waterfront Airport Hotel and Casino welcomed new members of its management team during a media lunch hosted by hotel manager Benhur Caballes. Introduced were executive chef Tristan Encarnacion, who has had 18 years of culinary exposure as consultant, food stylist, instructor and TV food show host; Food and beverage service manager April Lyn Pinay with her more than a decade F&B service experience; and safety and security manager Pancho Ramirez, Jr., a certified Security professional and a member of the Phil. Society of Industrial Security.

It was a delightful lunch with Consular Attache Jiang Wen of the People’s Republic of China and Commercial Attache Zhao Yiyuan at Luy’s Classic Tea House one sultry Thursday. The get-together was an appreciation lunch for media friends and an occasion for us to exchange ideas with the two lady consuls who are so refreshingly young and charming.