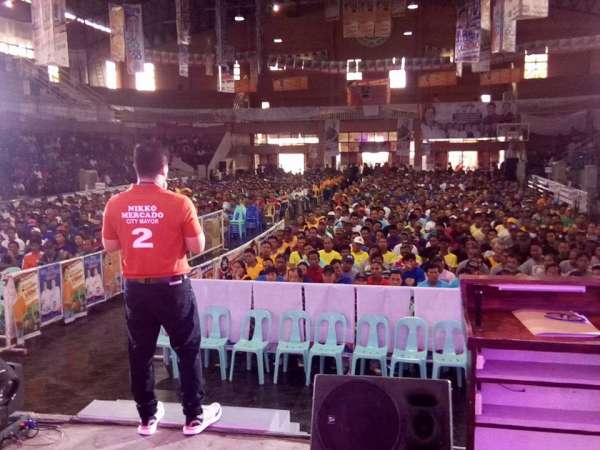 HUGPONG ng Pagbabago regional chairperson and Davao City Mayor Sara Duterte-Carpio along with her senatorial bets found a surge of support in the cities of Maasin and Tacloban during their campaign caravan on Tuesday, March 19.

Mayor Sara, who traces her roots in Maasin being the birthplace of her father-President Rodrigo Duterte, thanked Maasin City Mayor Nacional “Nikko” Mercado for opening his arms to the Hugpong senatorial candidates in this year’s midterm elections.

In her speech, Senator Villar said she is pushing for more livelihood projects in her next term in office, adding that they are building “Construction Schools” due to the booming construction business in the country brought by Duterte’s “Build, Build, Build” program.

Earlier on Tuesday, Duterte and her senatorial slate were also in Tacloban City for a grand caravan rally at the Tacloban Astrdome.

“We owe a lot from the people of Eastern Visayas for their support to President Rodrigo Duterte. I’ll take this opportunity to express our gratitude to everyone,” Dutere told the crowd at the jampacked center led by regional party-list group Tingog who hosted the event.

In her speech, Duterte believed that most of the problems in national will be solved in the local level, the reason why she is pushing for Tingog as a regional party-list group.

“I am very thankful, honored and grateful for the endorsement given to me by Mayor Sara in what is going to be a competitive speakership race,” said Romualdez.

“As a Malacañang ally, I am committed to push the legislative agenda of the President. Right now, I am working very hard to ensure my victory in the coming election,” he added.

Meanwhile, Rep. Romualdez said that the alliance between Tingog and Hugpong “will pave the way for a farther reach of the advocacies of both parties through the provision of mutual support.” (SunStar Philippines)