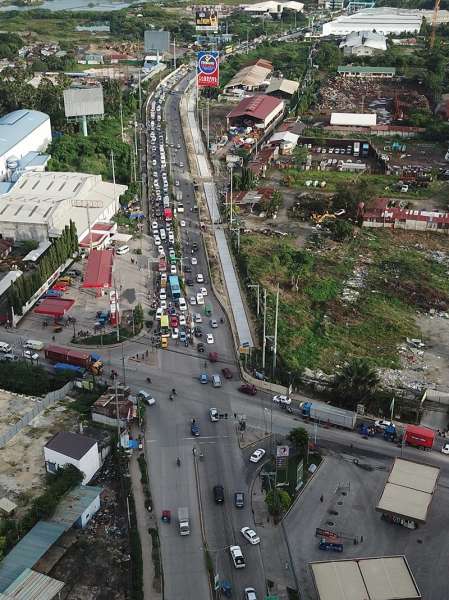 TRAFFIC SOLUTION: A flyover was supposed to be built along United Nations Ave. and Plaridel Road but was cancelled to prioritize big-ticket projects. (SunStar photo / Allan Cuizon)

THE Department of Public Works and Highways (DPWH) Central Visayas has shelved plans to build a flyover at United Nations Avenue (UN Ave.) and Plaridel Road in Mandaue City.

“Our flyover will be overtaken by so many big-ticket projects. We believe that we may have to defer it,” engineer Nonato Paylado, chief of the planing and design division of the DPWH 7, told Superbalita Cebu on Monday, March 18.

During the Metro Cebu Development and Coordinating Board meeting at the Capitol on Monday, Paylado said the tri-level pass project will not push through as planned.

He said when the tri-level project was conceptualized in 2010, the Metro Cebu Transport Master Plan (MCTMP) had not yet been created. When the MCTMP or what the Department of Transportation (DOTr) called an Integrated Transport System was created, they learned that the Urban Mass Rapid Transit (UMRT) was included.

“I would like to emphasize that the original concept of this project is really tri-level but because of some developments we try to prioritize which of the structures will be implemented first in order for us to be prepared for some of the upcoming big-ticket projects,” he said.

Paylado said the DPWH will have to study further the possibility of having a flyover in the area once the big-ticket projects will start.

“The UMRT that you hear like UMRT 1 and UMRT 2, it’s likely it will pass Plaridel. So if the flyover will block (the UMRT), it will be higher, which will be costly. Thus, we prefer that we defer (the flyover). Anyway, the underpass alone can greatly help in decongesting traffic,” he said in Cebuano.

The flyover is one of the components of the tri-level pass project in UN Avenue and Plaridel Road including the 602-meter underpass that has four lanes and an “on-grade” structure similar to the current road structure in the area.

He further explained that when the feasibility study for the Metro Cebu Expressway or what was then called the Cebu Circumferential Road was made, it was learned that the elevated highway along Ouano Avenue would not be fitting for the flyover.

He added that an underpass would complement any infrastructure project that would be done in the area.

In the same gathering, Paylado assured that the traffic situation in the area would not be affected once construction of the carriage way would start.

He added that ongoing road works are in place and a perimeter fence was already in place. Service roads are cemented. Trees have been cut. Posts were transferred and negotiations with affected property owners are ongoing.

They are also coordinating with the Mandaue City Government for the added detour that will help decongest traffic.

The DPWH was able to get P500 million in funding from the 2016 General Appropriations Act (GAA) and an additional P446 million in the 2017 GAA for the underpass component.

B.M. Marketing based in Leyte got the P711.8 million contract on Dec. 8, 2017 for the underpass construction.

According to Paylado, the underpass project is expected to be completed on June 4, 2020.

Meanwhile, the DPWH said Segment 3 of the 73.75-kilometer Metro Cebu Expressway has already been contracted by MQ Construction and cannot be undertaken by any big firm like Metro Pacific.