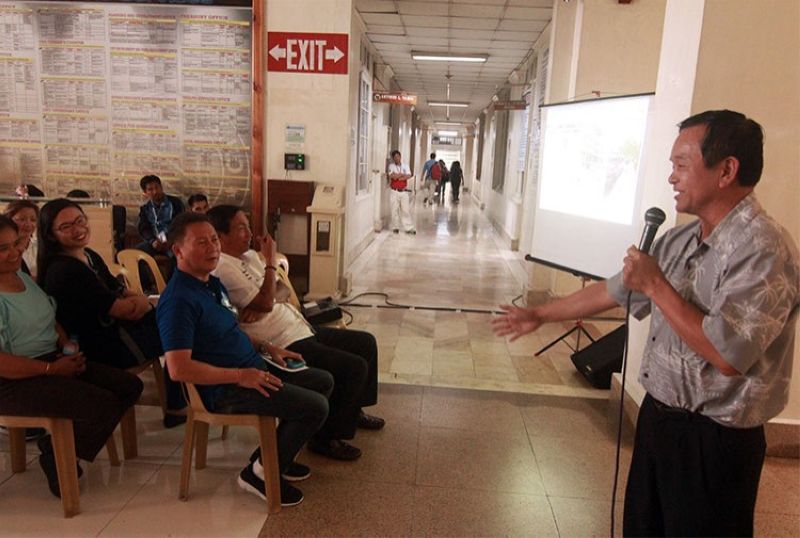 BENGUET. In this file photo, Tuba Mayor Ignacio Rivera stresses the need for cooperation and partnership between Baguio and Tuba to protect the environment. (Photo from baguio.gov.ph)

POLICE are considering the deployment of security escorts for Tuba, Benguet Mayor Ignacio Rivera after the official received death threats.

Rivera reported to the Tuba Municipal Police Station (Tuba MPS) that he received the first death threat through a text message on the morning of March 19.

Acod added that the local police is set to discuss with the Commission on Elections (Comelec) in Benguet Province the possible deployment of police security for Rivera.

“We have coordinated with Mayor Rivera regarding his security and for the meantime, we will be assigning police personnel in the areas where he will have his official functions while awaiting the decision of Comelec with regard to police escort for the mayor,” Acod added.

Benguet remains one of the most peaceful provinces in the country, with no recorded election-related violence.

Sun.Star Baguio has been trying to contact Rivera but was informed that the mayor was indisposed as of Wednesday afternoon, March 20.

Meanwhile, the Comelec en banc on Tuesday, March 19, declared the whole province of Abra as an election hotspot under Category Red, placing it under its full control.

Roncal was the concurrent election officer of Abra, who was ordered relieved from her post in the province last week.

She said they received a copy of the resolution on the same day that it was issued.

Category Red, or Election Areas of Grave Concern, is the worst classification for election hotspots.

Under this classification, Comelec may order the augmentation of the police and members of the Armed Forces of the Philippines (AFP) in the area based on the need or the perceived need of the Comelec official assigned to oversee the place.

During the election period, from February 13 to June 12, transfer of officials, appointment of personnel, and possession of any firearm outside the residence are prohibited, subject to a permit that the commission may issue.

However, an area declared as an election hotspot is exempted from such ruling, particularly on the movement of personnel, to assure the safety of the residents.

Roncal also said the commission may reshuffle the police force in the area to assure protection for all.

With the province having been declared an election hotspot, she said the resolution warrants the motu proprio (on its own) declaration of places within the province under Comelec control.

An area is declared a hotspot based on the recommendation of law enforcement agencies due to peace and order concerns, and violations of election laws. (With a report from PNA)