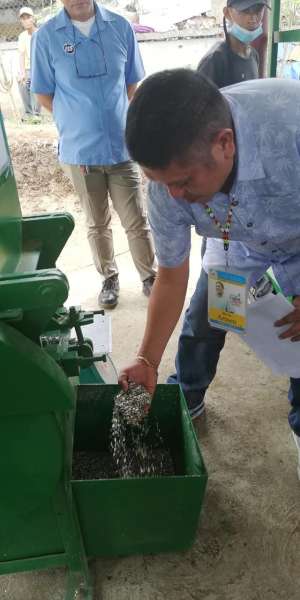 CAGAYAN DE ORO. Engineer Armen Cuenca, head of Cagayan de Oro's City Local Environment and Natural Resources Offices, checks the laminated plastic wastes that are to be used as core material in making for the Eco-bricks, Tuesday, March 19, a project the City Government has partnered with Nestle Philippines and Green Antz Builders, Inc., as a livelihood project for the 300 waste pickers in the old dumpsite in Zayas. (PJ Orias)

THE CAGAYAN de Oro Water District (COWD) is bracing for the possible effects of dry spell to the water supply, even as it gears up to prevent the risk of water shortage in the city.

However, the city’s water provider has been gearing up to reduce the possibility of having to ration water for its 700,000 users.

“As the summer heat intensifies and the impacts of the El Niño phenomenon strongly felt, so does the risk of experiencing water shortage,” the statement reads.

“Several areas in the eastern part of Metro Manila has been experiencing water service interruptions due to the lowering of the water level in La Mesa Dam,” the statement added.

The COWD has assured all measures are in place to ensure water supply remains stable.

Water levels in all its production wells are regularly monitored and preventive maintenance is also carried out periodically to make certain that these wells are in good operating condition, considering that these facilities operate 24/7 (24 hours a day, seven days a week).

Pipeline leak repairs are also intensified so as to prevent wastage of water while concessionaires are urged to use water wisely by conserving, recycling and reusing it.

“They are also encouraged to report leaks and check for leaks in their pipeline system as well. In so doing, these leaks could be immediately repaired,” COWD said.

COWD said these measures being implemented are contained in COWD's Emergency Response Plan for drought.

It also said it was timely that just last year, the Cagayan de Oro Bulk Water Inc. (Cobi) has increased its supply to COWD's west service area customers by 20 million liters per day (20 mld) and has also augmented the east service area's supply by another 20 mld through its eastern pipeline.

“This means there is more water available for more people to use. Cobi itself is also doing its own preventive measures to ensure continued supply during these summer months,” COWD said.

COWD also responded to the water supply requests of yet unserved areas like Barangays Indahag and Balubad by allowing them to extract water from its booster station in Macasandig, while it added that mitigating the effects of El Niño on water supply is everyone's concern.

“Conserving water is the most practical thing all of us could do. Simple ways like turning off the faucet while brushing your teeth, using a pail instead of a hose in cleaning the car, watering the plants early in the morning or in the evening and many other ways,” its statement said.

“Whatever the weather condition is, it is always a good idea to store water in clean covered containers for use when water service may have to be interrupted due to repair and maintenance or upgrading works,” it added.