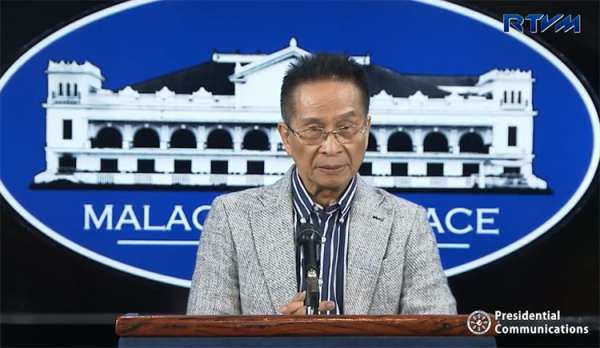 THE termination of appointments of government peace panel members negotiating with communist insurgents was meant to pave the way for the creation of committees that will engage in localized peace deals, Malacañang clarified Thursday, March 21.

Panelo made the clarification after Duterte dissolved on March 18 the government negotiating peace panel led by Labor Secretary Silvestre Bello III, following the stalled peace negotiations with the communist movement.

On Wednesday, March 20, communist founder Jose Maria Sison said that his group had already anticipated the cancellation of appointment of the government peace negotiating panel.

Sison also accused Duterte of having "no interest in the peace negotiations because he has always schemed to use the armed conflict as an excuse for carrying out martial law nationwide and for railroading charter change to a bogus kind of federalism, in order to realize and impose fascist dictatorship on the Filipino people."

Panelo countered Sison's remarks, saying the latest move would be more advantageous to the communists.

Presidential Peace Adviser Carlito Galvez Jr. noted Wednesday, March 20, that the new panels that will be created to supervise localized peace engagements would be based on the Colombian model, which includes representatives from different sectoral groups, local government units, and the military "whose presence are essential to the peace negotiations."

The peace negotiations between the government and the National Democratic Front, political wing of the communist party, has been intermittent since it commenced in 1986.

In November 2017, Duterte issued a proclamation, which formally terminated the peace talks with the communist guerillas, following the series of attacks staged by the New People's Army, armed component of the communists, against the government forces.