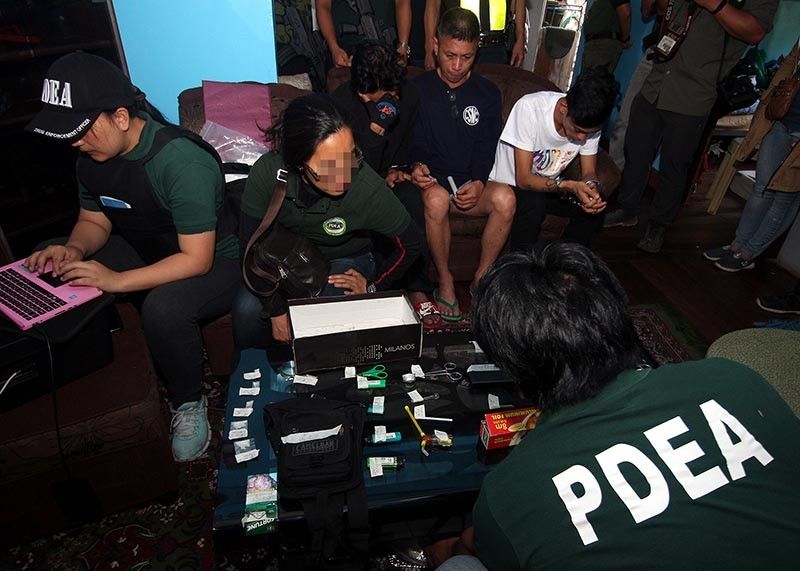 BAGUIO. Anti-narcotics agents from the Philippine Drug Enforcement Agency (PDEA) conduct an inventory of the drug paraphernalia confiscated after the implementation of a search warrant in Upper QM, Baguio City. (Photo by Jean Nicole Cortes)

THREE suspected drug dealers were arrested and some P20,400 worth of shabu were confiscated Wednesday afternoon in a drug bust in Baguio City.

Three other suspected drug personalities were arrested in Kalinga after they were caught having a pot session at the construction site for a school building in Nambaran, Tabuk City in the afternoon of March 16.

In Baguio City, suspected drug dealer Angel Sto. Domingo Francisco, 50, and a resident of Upper QM was arrested by authorities led by the Philippine Drug Enforcement Agency (PDEA) in Cordillera.

Francisco was arrested together with Eugene Ramos Bacani, a high value target of PDEA, and Louie Lupian Bacani.

During the disposal of the plants, operatives discovered 107,600 fully grown marijuana plants in five plantations with a total land area of 5,650 square meters.

Marijuana is the second most abused drug in the country. The plant is grown in the mountains of Cordillera.

This year, the PDEA and PNP conducted eight marijuana eradication operations in the Cordillera. (With a report from Jonathan Llanes)