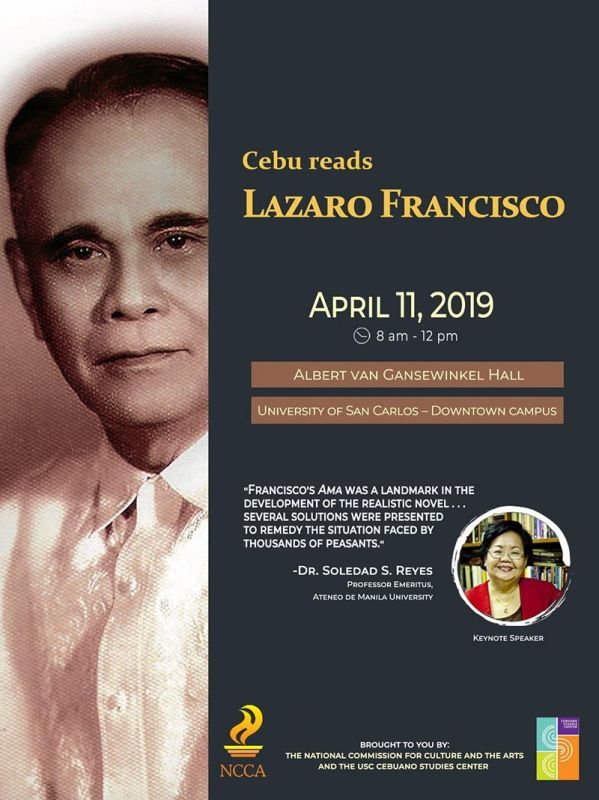 IN ACCORDANCE with Proclamation No. 968, signed in 2015, the National Literature Month (NLM) is celebrated every April, under the auspices of the National Commission for Culture and the Arts (NCCA), Komisyon sa Wikang Filipino (KWF) and the National Book Development Board-Philippines.

This year’s theme is “Buklugan Panitikan,” a phrase adapted from buklog, the Subanen ritual for community-bonding and thanksgiving.

In Cebu, under the initiative of the University of San Carlos (USC)-Cebuano Studies Center (CSC), headed by its director, Dr. Hope Sabanpan-Yu, the literary community will celebrate a three-day festival called “Joy to the Word,” where readings, workshops, presentations and discussions will be held in the Wrocklage Yard of the University of San Carlos-Downtown Campus on April 4-6.

Readers will have a chance to meet long-admired authors, as well as discover upcoming writers in a segment called “Up Close and Personal: Conversations with Cebuano Writers.”

Attendees will witness Cebuano plays being read, new works being staged and poetry performed by the poets themselves. They will also get to listen to talks on storybook illustration by Josua Cabrera, blogging by Erik Requina and Hazel Cesa, vlogging and filmmaking by Bradley Tenchavez, zine production by Erik Tuban and zine design by Jay Nathan Jore.

A book fair and photo exhibit will feature writers’ organizations in Cebu such as the Women in Literary Arts-Cebu (Wila-Cebu), Mga Anak sa Dagang (MAD), Tinta, The Stray Poets Collective, and Bathalan-ong Halad sa Dagang-Sugbo (Bathalad-Sugbo), which is the recipient of the Gawad Pedro Bucaneg 2019 conferred by the Unyon ng mga Manunulat sa Pilipinas.

Still in line with the NLM celebration is an event dubbed as “Cebu Reads Lazaro Francisco” to be held at the Fr. Albert Van Gansewinkel Hall in the USC-Downtown Campus on April 11, from 8 a.m. to 12 p.m.

A dramatic reading of excerpts of Francisco’s work will be presented.

The event will also be graced by the National Artist for Literature Resil B. Mojares, professor emeritus of USC.

The “Cebu Reads Lazaro Francisco” is sponsored by the NCCA, KWF and the USC-CSC, in cooperation with the USC-Department of Communications, Linguistics and Literature.

The activity aims to introduce and showcase Francisco’s genius to the contemporary generation of Filipinos, to encourage the youth to return and read the early meaningful Filipino writers in the different languages.

The keynote address will be delivered by Dr. Soledad Reyes, professor emeritus of the Ateneo De Manila University.

She is also the primary critic of Francisco’s works and in the critical discussions with invited experts, who will tackle the writer’s body of work. To present their papers are Haidee Emmie Palapar, Joanalyn Gabales, Francis Luis Torres, Niño Augustin Loyola and Clyde Inso Chan.