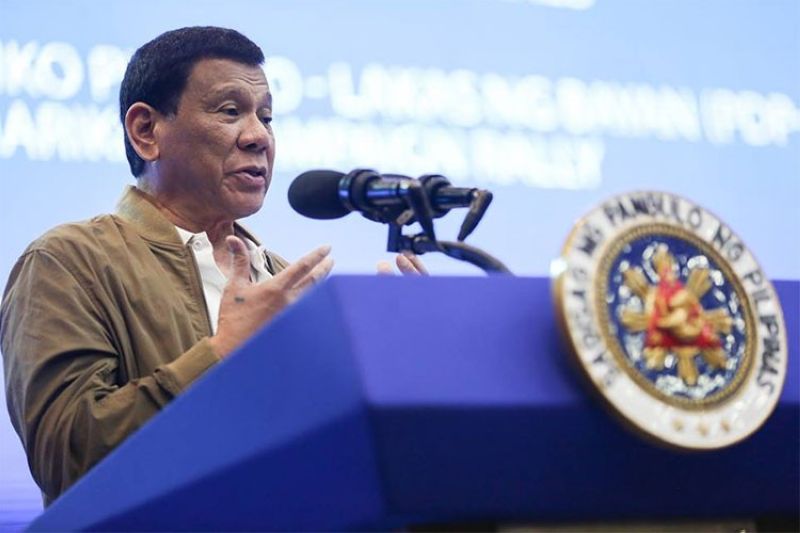 PRESIDENT Rodrigo Duterte has signed an executive order (EO), giving stricter rules and regulations, and specific rates of expenses and allowances for the official local and foreign travels of all government workers.

Under the EO, a government personnel is authorized to travel abroad for international conferences, official missions, scholarships, fellowships, trainings, and studies abroad, invitations for speaking engagements, and for acceptance of awards.

In case of trips involving delegations, the authorized approving authority should ensure that the number of participants is "kept to the barest minimum," and the role of each delegation member is "clearly specified and justified in the travel application or proposal."

Official foreign travels and payment of travel expenses of department secretaries, chairs and members of governing boards, chief executive officers of GOCCs and GFIs, and heads of NGAs need the approval of the Office of the President (OP).

Department secretaries are given the authority to approve the official overseas trip of personnel in NGAs, GOCCs, GFIs.

Heads of agencies, GOCCs and GFIs are also authorized to approve the official foreign trips of their subordinates.

Water district directors need to secure the approval of Public Works secretary, while heads of SUCs have to get the nod of the Commission on Higher Education (Ched) chairperson.

The EO also grants the Technical Education and Skills Development Authority (Tesda) chair to approve the official foreign travels of heads of technical and vocational heads.

As for the personnel in LGUs, the local government secretary is tasked to approve their official overseas travel.

The approval of official foreign travels of personnel in the Congress of the Philippines, the Judiciary, Constitutional Commissions, and the Office of the Ombudsman shall be prescribed by the respective heads of those agencies.

Pre-departure expenses not exceeding P3,500 will be granted to cover miscellaneous expenses for taxicab fare, passport processing, immunization and medical laboratory fees, photographs, porterage, airport terminal fees, if any, and other related expenses.

The EO also allows the reimbursement of airport terminal fees imposed at the point of embarkation on the return trip to the Philippines.

Government personnel will likewise be given transportation expenses for the economy class, in case it will not be shouldered by the host country or sponsoring organization.

The EO also grants clothing allowance of up to $400 for government worker who is on foreign travel in tropical countries for six months, and $400 who is on country with autumn or winter season.

However, the clothing allowance will not be granted, if donor institutions offer the same allowance that is equal to or higher than the indicated amount.

Those who travel abroad will also be granted the daily subsistence allowance, which will only start upon arrival at the country of destination and cease upon departure there from.

Personnel on foreign travel may be entitled to travel insurance at the minimum amount required by the country of destination, depending on the duration of the official travel or a travel coverage of P500,000, if there is no minimum coverage set by a country.

EO 77 emphasizes that "all forms of travel junkets shall be strictly prohibited."

"The conduct of strategic planning workshops or team building activities abroad shall not be allowed. The taking of a personal leave immediately before or after the official activity is highly discouraged," the order stressed.

"If travel circumstances, such as the nature of activity, purpose and itinerary, indicate that the trip is mainly intended for personal purposes, no part thereof shall be considered as official," it added.

The EO also mandated government personnel to fully disclose official foreign trips that are "partially of fully sponsored or funded by private corporations or private individuals."

EO 77 noted that no official or personal travel of government officials and employees should be funder "directly or indirectly, fully or partially," by private individuals, including suppliers or contractors, with pending requests or applications or future dealing with any branch, department, bureau, or office of the national government.

Meantime, official local travels of heads of NGAs; chairs of governing boards; and heads of SUCs, GOCCs, and GFIs need not to be approved by higher authorities.

Government workers embarked in official local travel to destinations beyond the 50-kilometer radius from the permanent official station will be granted transportation expenses and miscellaneous expenses, and daily travel expenses of up to P2,200.

The funds for local and foreign travels will be charged against the appropriation for traveling expenses in the annual agency budgets, in the case of government personnel in the NGAs, including SUCs.

For GOCCs, GFIs, and LGUs, funds for the purpose will be sourced solely from their respective corporate and local funds.