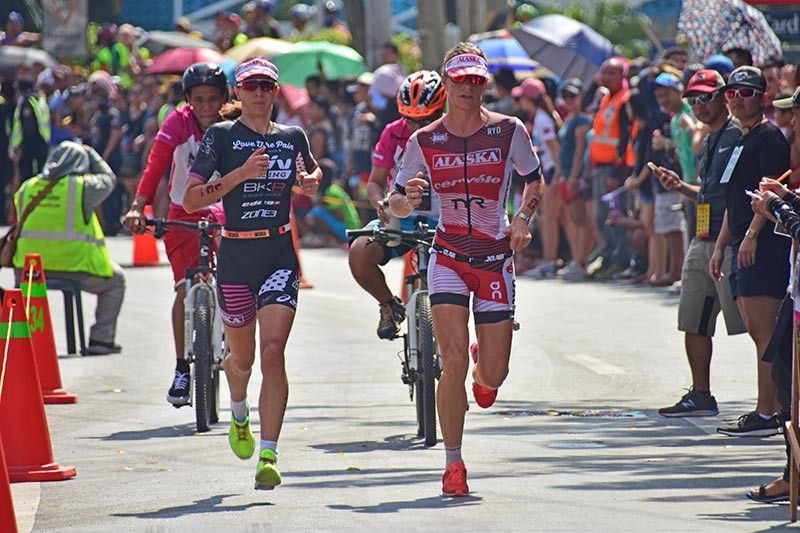 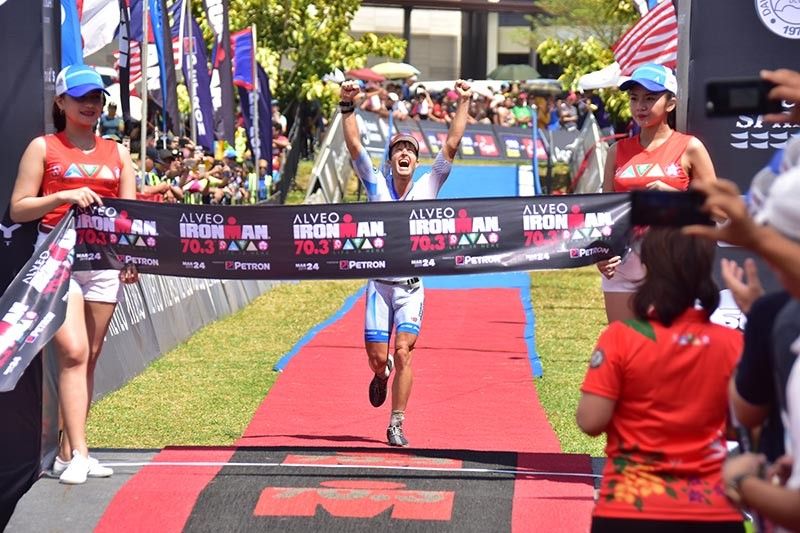 DAVAO. Markus Rolli of Germany celebrates at the finish line after topping the pro men's event of the second Alveo Ironman 70.3 Davao at the Azuela Cove Sunday, March 24. (Photo by Macky Lim)

MARKUS Rolli of Germany surprised an elite field to win the pro men's title while Radka Kahlefeldt overcame a stiff challenge in the bike and run stages to retain the pro women's crown at the close of the second Alveo Ironman 70.3 Davao held in an out-and-back course from Azuela Cove in Davao City Sunday, March 24.

The 26-year-old Rolli, who was only second to Bahrain Eric Watson after the 1.9-kilometer swim, made a sheer display of his skills in the 90-K Azuela Cove-Tagum City-Azuela Cove biking course by clocking two hours and 50 seconds, way ahead of eventual runner-up Craig Alexander of Australia.

"The swim was perfect for me. I came out on the front. In bike I took the risk although it was very hot in the beginning. The run, it was very tough like I started to suffer with my leg muscles, I think I overbiked a little bit. But it was a great day for me. I am very happy to win," he said in a media interview, adding that it was an honor for him to race with world champions and last year's winner Mauricio Mendez, who unfortunately did not finish due to technical trouble with his bike.

The German, cheered on by his parents during the race, continued, "Three weeks ago, (while in training camp in Phuket, Thailand), I just dreamed about racing with them. Now I actually beat them I'm just happy," he added.

In a press statement, Kahlefeldt said she's happy to come back and win again. “It was tough and the whole race was hard since I had to fight it out with Steffen. It’s never easy to beat her,” she said.