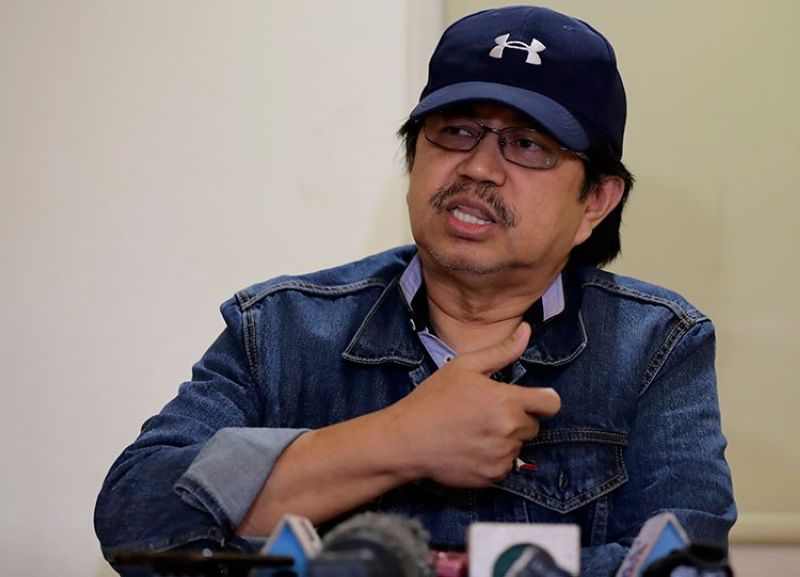 MANILA. In this March 24, 2019 photo, former Police Senior Superintendent Eduardo Acierto gestures during a clandestine news conference for the first time with a select group of journalists in Manila. (AP)

A DISMISSED police official has tagged two Chinese nationals, who are close to President Rodrigo Duterte, as drug lords.

Senior Superintendent Eduardo Acierto, who was earlier ordered dismissed by the Office of the Ombudsman over the missing AK-47 assault rifles that allegedly ended in the hands of communist rebels, exposed on Sunday, March 24, several documents linking Davao-based Chinese businessman Michael Yang and a certain Allan Lim to illegal drug trade.

Yang, reportedly one of the biggest financial supporters of Duterte during his campaign, is also one of the President’s economic advisers.

Acierto, who had been a member of the Philippine National Police’s (PNP) anti-narcotics units for at least 18 years, said he prepared the report in August 2017 and submitted it to then PNP chief Ronald dela Rosa, then Philippine Drug Enforcement Agency (PDEA) director Aaron Aquino, and Police Deputy Director General Camilo Cascolan.

Acierto said his intention for submitting such report was to warn the government, especially Duterte.

He said he has an asset, whom he identified as “Panther,” belonging to the drug group led by Yang and Lim, who were responsible for running a clandestine laboratory in Davao and Cagayan de Oro.

In October 2018, Duterte tagged Acierto as among the police officials involved in illegal drugs and cleared Yang on his alleged drug links.

Acierto was also implicated in the P11 billion worth of smuggled drugs concealed in magnetic lifters that were found at the Manila International Container Port (MICP), as well as in a warehouse in Cavite.

Duterte said even Chinese Ambassador to the Philippines Zhao Jinhua, who also has close ties with Yang, cleared the latter from illegal drugs link.

But he also said that he received a “dossier” implicating Yang in illegal drug operations.

“If the President was really mad about illegal drugs, why did he not order (Yang and Lim) arrested? Or even just have them investigated?” Acierto said.

“I was not remiss in providing them a detailed report... What I just did was to investigate key people (behind the illegal drug trade). Now, it’s me whose life is in danger,” he added.

Acierto said he received an information that a “Davao group” was contracted to kill him with a reward of P15 million.

He said he had sought for the assistance of a religious group for his and his family’s safety.

In a text message to reporters, Albayalde said he could no longer remember receiving such report.

“However, if indeed na may report s'ya and if that report is actionable, he should have acted on it, him being with PDEG (Police Drug Enforcement Group), an operating unit of the PNP on ill drugs, regardless kung sino ung tao. And he should have informed his immediate boss about it,” he said. (SunStar Philippines)