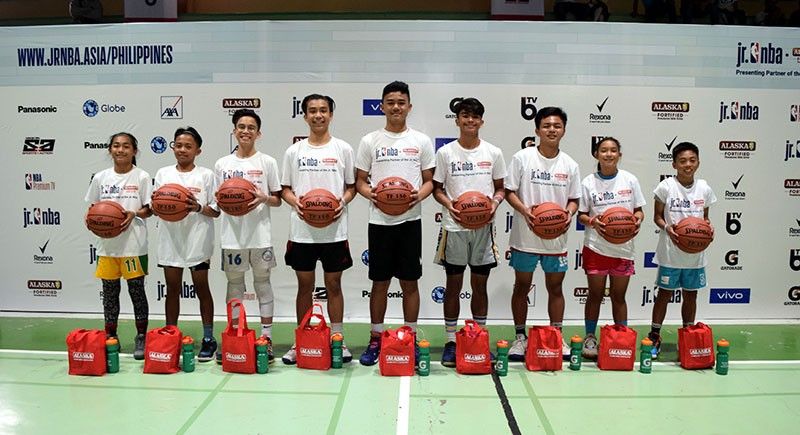 NINE dribblers from North Luzon found their way to the Jr. NBA Philippines National Training Camp after impressing trainers during the Regional Selection Camp at Benguet State University in La Trinidad on March 23-24.

After two days of basketball drills and exercises, seven boys and two girls exhibited outstanding on court skills and embodied the core values of the game edging over a thousand young basketball players from Baguio, Benguet, Nueva Ecija, Tarlac, La Union, Ilocos Sur, Pangasinan and other nearby provinces.

The nine will move on to the Jr. NBA Philippines National Training Camp-- in Don Bosco Technical Institute Makati on May 17-19.

The girls who will strut their wares in the national training camp are Jhulliana Francesca Pagteilah from San Jose School of La Trinidad Inc. and Christine Nicole Venterez of Baguio City National High School.

A roster of 40 boys and 40 girls will be gathered from the Jr. NBA Philippines Regional Selection Camps in Benguet, Butuan, Dumaguete, Lucena, and Metro Manila, and a select group from the Alaska Power Camp.

Players from across the archipelago will showcase their talents and vie to be named as Jr. NBA Philippines All-Stars.

“What I’ve noticed here in Baguio is that there are a lot of good dribblers. The kids here are very competitive, very enthusiastic. They’re working hard. The three questions I always ask the kids – Did you have fun? Did you give your best? And the last one is, do you love basketball? And it’s all, “Yes! Yes! Yes!” and I think that’s our goal here, making sure that the kids are learning basketball, they’re having fun and more importantly they are giving their best,” said former PBA player Tony dela Cruz from presenting partner Alaska.

This year, Jr. NBA Philippines All-Stars—comprised of as many as five boys and five girls—will compete in the first Jr. NBA Global Championship Asia Pacific Selection Camp, a week-long camp in June that includes top youth players from North Asia, Southeast Asia and the Pacific region.

The Asia Pacific regional competition will provide the 2019 batch of Jr. NBA All-Stars the opportunity to represent the region in the Jr. NBA Global Championship that will be held Aug. 6-11 at ESPN Wide World of Sports Complex at Walt Disney World near Orlando, Florida. The international event will feature talented youth from the United States, Canada, Latin America, Europe, the Middle East, China, Mexico, Africa, India and the Asia-Pacific.