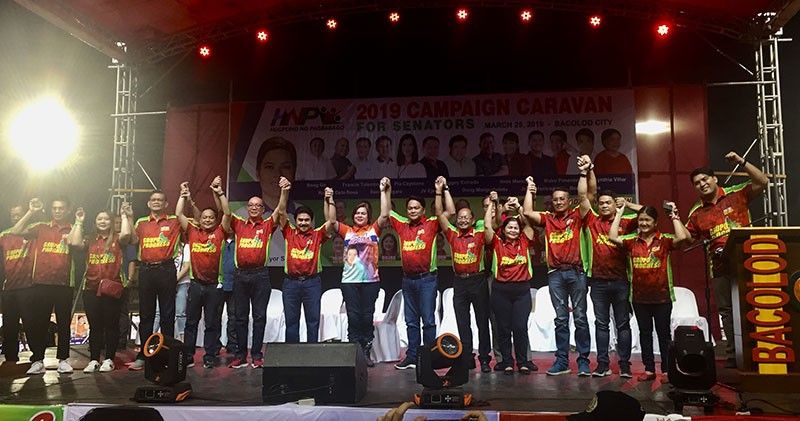 “I FEEL that it was a blessing in disguise.’

This was stressed by Bacolod City Mayor Evelio Leonardia after his political group Grupo Progreso (GP) signed an alliance with the regional party Hugpong ng Pagbabago (HnP) for mutual support and cooperation in the May 13 elections.

The alliance agreement was signed by Leonardia, head of GP, and Davao City Mayor Sara Duterte-Carpio, chairperson of HnP, during the campaign rally for the HnP senatorial candidates held at the Panaad Park and Stadium in Barangay Mansilingan, Bacolod City on Monday night, March 25.

“That formalizes our plan and I feel that it was a blessing in disguise that it did not materialize in previous years because of some circumstances and this could not come at a much better time,” Leonardia said.

With the HnP alliance, he said that it’s also a recognition of not just the existence, but the value of GP.

“Before they (HnP) decided, they also held a background check on our group,” he added.

The agreement stated that the parties shall cooperate within the framework of their respective mandates and authority in the implementation of their responsibilities in pursuit of the agreement.

The agreement is effective on the day of the signing of agreement and will terminate on June 30, 2019.

Of the 13 senatorial candidates, only Pimentel and Cayetano were not present during the rally at the Panaad Park and Stadium, which was attended by at least 15,000 Bacoleños, while Marcos was represented by her brother, former senator Ferdinand “Bongbong” Marcos Jr.

“In this time, the Duterte Era, we are happy because Bacolod has been chosen by the HnP to host one of its campaign rallies. As early as October, Mayor Inday Sara Duterte promised they will be here on March 25 and we are happy that she endorsed us,” Leonardia said.

Representative Greg Gasataya and Vice Mayor El Cid Familiaran also said they are thankful for the trust of the HnP and for endorsing the slate of Grupo Progreso.

“We were humbled by that endorsement and rest assured that we will continue to work and implement the programs and projects for the people of Bacolod,” they said.