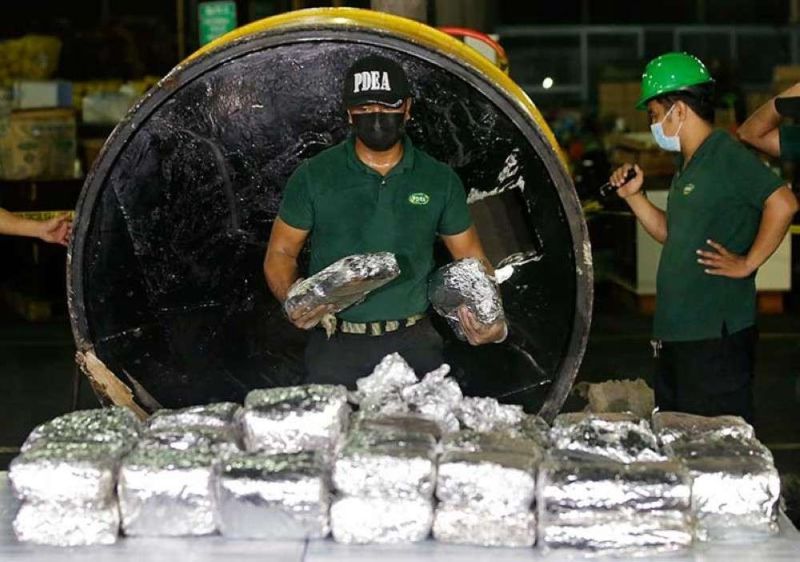 MANILA. A member of the Philippine Drug Enforcement Agency collects packs of methamphetamine hydrochloride also known as "shabu" which they found hidden inside a steel cylinder in one of the biggest drug hauls in Manila on August 7, 2018. (AP)

“Of course, no. Kung makikita mo on our number of (drug surrenderers) number of (drug) seizures. Malaki ang nakukuha natin drugs, worth billions of pesos,” he said in a television interview.

Aquino was referring to the billions of pesos worth of shabu (methamphetamine hydrochloride) intercepted at the Manila International Container Port (MICP) and in other areas recently.

He said intercepting large amounts of illegal drugs before it made rounds in the streets nationwide is a good indication that the government is winning on its war on drugs.

“It is good now (that) we are able to intercept this big volumes of illegal drugs and the good thing we are having a good and open communication with international counterparts,” he added.

In a speech in Davao City over the weekend, Duterte said the illegal drug problem has worsened despite the relentless effort of the government to end it and make the country drug-free.

“But if you tinker with drugs and if you continue to feed our children with drugs and trafficking... Things have worsened. My policemen are on the brink of surrendering,” he said.

“In the end, we will be like Mexico. We will be controlled by drug cartels. The Sinaloa has already entered the country and that is why drugs are being thrown in the Pacific. The same is happening in the West,” he added.

Expounding Banac’s statement, PNP Chief Oscar Albayalde said the country’s law enforcement is still challenged by their lack of capabilities and equipment to further boost their war on drugs.

He also cited the lack of death penalty in the country against illegal drug peddlers, which made them unafraid to continue illegal transactions in the country.

But Albayalde said they will not surrender in their crackdown on illegal drugs, stressing Duterte made the statement only out of frustration.

“Our peace and order is improving. It has improved a lot for the past three years. ‘Yung frustration there is despite of this effort nakikita natin ganyan pa rin volume ng pasok sa drugs sa ating bansa,” he added. (SunStar Philippines)