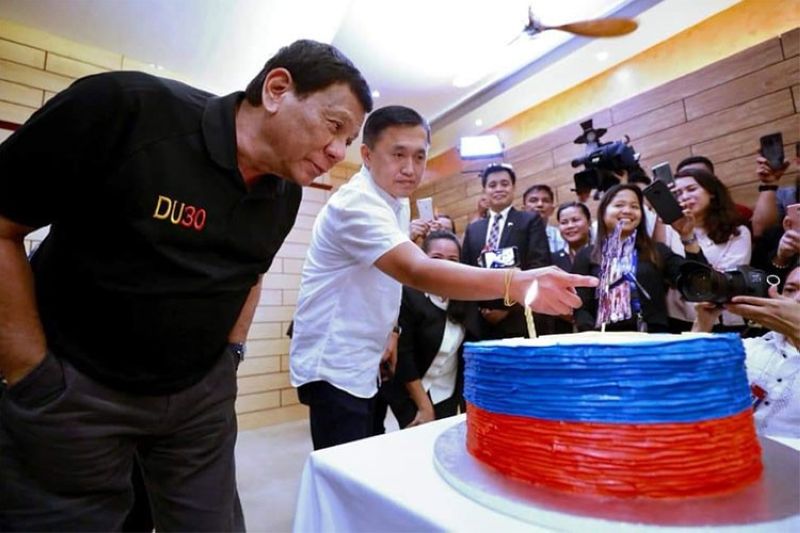 PRESIDENT Rodrigo Duterte, who turns 74 today, March 28, only wished for a "prosperous and progressive" Philippines.

Duterte made the birthday wish during his dinner with the Presidential Security Group at Matina Enclaves in Davao City on Wednesday night, March 27.

In a video taken by one of the staff of Matina Enclaves, Duterte wished that the country would not be involved in any tensions among other nations.

"My wish? Well, that this government will prosper and huwag sana tayong magka-mali (may we not make wrong decisions)," the President said.

"My wish is that we will just continue to progress and prosper as a nation. Hindi tayo sasali diyan sa mga gulu-gulo sa ibang bayan (We will not join any rift among any countries)," he added.

Duterte also reiterated that on his 74th birthday, he would just be at home, "sleeping all day."

In a statement, Cabinet Secretary Karlo Nograles said the country is blessed to have Duterte as its president who he dubbed as "one of the most intense and focused persons in government."

"On behalf of the Office of the Cabinet Secretary, I would like to greet the President a very Happy 74th Birthday," he said.

"We are truly blessed to have Mayor Rody as President. I've always known him to be one of the most intense and focused persons in government; his passion tempered by a soft heart for the ordinary Filipino. His style of leadership is very much defined by his own strong personality, which we have witnessed countless times in Davao City and beyond. This is the type of leadership we need as a country now," Nograles added.

Nograles also wished the President the "best of health in body and spirit," as the latter continues to serve the nation in fulfillment of his promises to the Filipino people.

For Communications Secretary Jose Ruperto Martin Andanar, destiny designed Duterte's name 74 years ago "to lead that we may follow, and to follow that we may live, your noble cause within our lives." (SunStar Philippines)