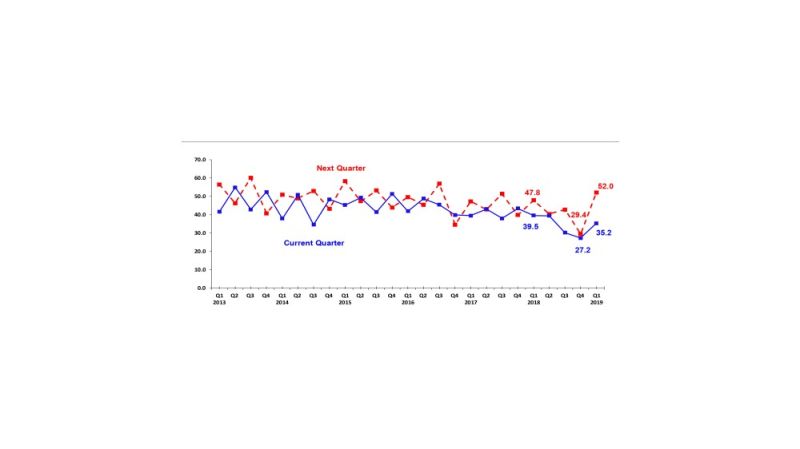 CONFIDENCE. Business sentiment picked up for the first quarter of 2019, with respondents expecting business activities to pick up at the start of the campaign period. (Graph Courtesy of the Bangko Sentral ng Pilipinas)

BUSINESS outlook on the economy improved for the first quarter of 2019, with the overall confidence index (CI) rising to 35.2 percent from 27.2 percent for the fourth quarter of 2018, the quarterly Business Expectations Survey (BES) of the Bangko Sentral ng Pilipinas found.

According to respondents, their more upbeat outlook was due primarily to expectations of more business activities during the start of the campaign period for the forthcoming midterm elections, increased orders and consumer purchases with the easing of inflation, higher government infrastructure spending with the “Build, Build, Build” strategy of the current administration, introduction of new and enhanced business strategies and processes, and expansion of businesses and new product lines.

They were also optimistic that their business operations would benefit from the favorable macroeconomic conditions in the country, particularly lower inflation and interest rates.

Respondents turned more bullish for the quarter ahead as the CI rose to 52 percent from 29.4 percent in the previous quarter. This next quarter reading is the highest since the fourth quarter of 2016.

Business optimism was heightened on the back of broadly the same factors that were behind the buoyant sentiment for the first quarter. In particular, respondents cited the usual increase in demand during summer (in view of the foreseen increase in the number of local and foreign tourists), enrollment and harvest periods, election-related spending in the run-up to the elections in May, sustained increase in orders and projects leading to higher volume of production, and more construction activities (public and private) during the dry season as reasons behind their more bullish outlook.

The outlook of businesses involved in international commodity trading turned more buoyant for the first and second quarters.

Among business types, importers were the most bullish for the current quarter on account of improved availability of raw materials (corrugated fiberboards), introduction of new models (automobiles), and higher demand for construction materials and equipment (electrical transmission, lubricant products, glass, steel and earth-moving machines).

Likewise, exporters were more optimistic as they expected an increase in orders from abroad and expansion of new product lines.

Domestic-oriented firms view that economic growth would be driven by robust consumer demand, arising from seasonal factors during summer and decline in consumer prices, and better prices of commodities like sugar. The outlook of dual-activity firms (both importer and exporter) was also more favorable, as firms benefited from expectations of increasing volume of sales/orders from domestic and external markets and brighter prospects in the economy.

The construction sector was the most bullish for the first quarter, due mainly to continued construction projects (both public and private) at the onset of 2019. Likewise, sentiment of firms in the services sector was more upbeat. Among the services sub-sectors, community and social services posted the highest confidence index, with the optimism emanating largely from medical institutions, as respondents noted higher bed occupancy rates in hospitals, enrollment in medical courses and business expansion.

Industry firms’ outlook turned broadly more buoyant across sub-sectors with the exception of agriculture, fishery and forestry, whose outlook turned less buoyant on account of lower production during the lean season.

Mining and quarrying registered the most improved index, with the upsurge in demand for construction materials (aggregates, asphalt, concrete and paving materials) due to various infrastructure projects in the pipeline.

The steady outlook of the trade sector stemmed from firms’ expectations that the more favorable business conditions were tempered by the typical slack in demand and lack of sales promotions after the Christmas season, stiffer competition with the expansion of shopping malls and supermarket chains, and higher fuel costs due to the implementation of the second tranche of the Tax Reform for Acceleration and Inclusion Law.