Center for students who want to study in US opens 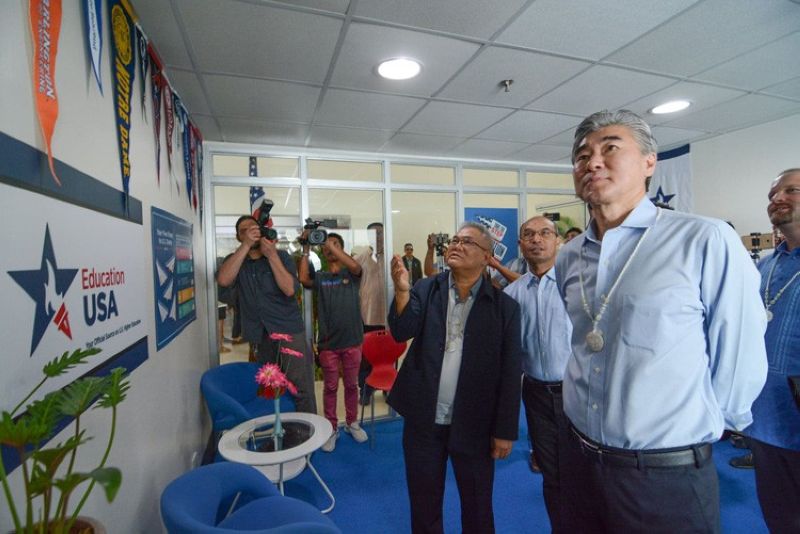 CEBU. Sung Kim, US Ambassador to the Philippines, (right, foreground) is in Cebu to inaugurate its advising center at the University of San Carlos-Talamban (USC-TC) on Friday, March 29. (SunStar Cebu/ Arni Aclao)

TO OPEN opportunities for Cebuanos to study abroad, the United States Embassy launched the first EducationUSA advising center in Cebu at the University of San Carlos-Talamban Campus on Friday, March 29.

US Ambassador Sung Kim said they established the center as young Cebuanos and other students in neighboring provinces showed interest in enrolling in American universities.

“The EducationUSA advicing center is a tremendous resource for anyone who has an interest in studying in the United States. Young people in this area will have access to useful information here in EducationUSA,” he said.

This is the first advising center opened outside Manila.

Kim said the number of Filipino students studying in the US went up seven percent. He hopes the number will further increase with the opening of the center here in Cebu.

“We held US university fairs both in Manila and Cebu. The response has been tremendous. There were thousands of students who came to talk to university representatives,” he said.

“The turnout has been tremendous, reinforcing the need for the year-round advising services that this center will provide,” Kim said.

Fr. Dionisio Miranda, SVD, president of the University of San Carlos, welcomed the center’s opening, saying it would benefit students interested in studying in the US.

The center, which is located on the second floor of the Josef Baumgartner Learning Resource Center, is open to everybody and is free of charge.

It has a variety of free educational resources, including public information sessions, webinars, one-on-one and cohort advising and hands-on support for completing the US college application process.