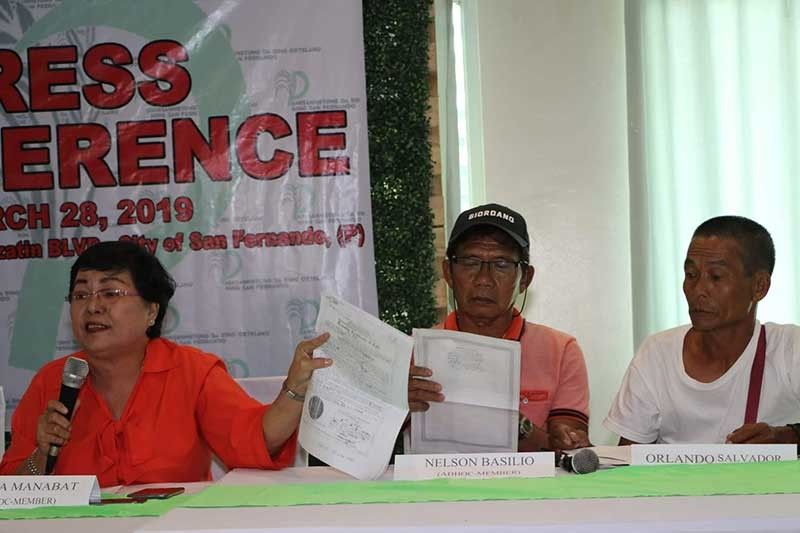 A GROUP of Fernandino farmers on Thursday afternoon, March 28, decried the alleged “sudden cancellation” of the titles and tax declarations of their farmlands without formal notice.

Orlando Salvador, a member of the Pamisanmetung Da Ring Ortelanu Ning San Fernando group, disclosed during a media forum that the titles of at least 53 hectares of farmlands in Barangay Sta. Lucia here owned by some 28 individuals here were “cancelled.”

“Nandin abak, minta ku city hall para mamayad amilyar pero itang metung kung titulu e de tinggap ning City Assessor’s Office (CAO). Ing sabi da, mecancel ya kanu ing titulu. Kitang ku bakit, sabi da pepacancel ne ning mikabandi (This morning, I went to the city hall to pay my real property tax but one of my land titles was not accepted by the City Assessor’s Office. They told me it was cancelled. I asked them why and their only answer is that the owner asked for its cancellation),” Salvador narrated.

Salvador said that he was appalled upon learning of the sudden cancellation of the land title, especially that he was able to pay the real property tax in 2017, but failed in 2018 “due to lack of financial capability.”

He stressed that the land was awarded to them by the Department of Agrarian Reform several years back and they were diligent in paying its dues to ensure that it will not be invalidated.

Under the law, a property can be considered tax-delinquent and may be up for public auction if the owner failed to settle its real property tax for at least 36 months and the interest that it accrued remained unpaid.

The group claimed that payment of real property tax is “being manipulated by investors who team up with local leaders in forcing land owners to sell their properties” to expand their businesses.

“Farmers in the city experience being neglected or not being aided by local leaders for the development of their lands. This we see as deliberate and aimed at making it impossible for them to maintain the upkeep of their farms, forcing them to sell their lands to investors who, more often than not, are partners with the local leaders,” the farmers’ group claimed.

Meanwhile, CAO head Luz Bautista, in a separate interview, clarified that the office’s refusal to accept Salvador’s payment for real property tax is an implementation of a Supreme Court order served to them in 2018.

She disclosed that Salvador’s concern is a land dispute problem between the farmers and a certain Whitaker family which originally owned the lot and which case must be addressed to the court, and not to the CAO or the city government as a whole.

“This land dispute problem goes way, way back. The Whitakers have been dealing with this concern ever since and just recently, they brought an order from the Supreme Court to cancel the farmers’ emancipation patents (EPs),” she explained.

EPs are the legal instruments that secure the ownership and tenure of the farmers to the land.

Bautista said Salvador and other farmers were urged to air and discuss their concerns with the Whitakers and the court as the CAO is only following the court order, otherwise, they will be cited in contempt.

She also clarified that CAO only cancelled the properties’ tax declaration in compliance with the said court order but were not responsible and do not have the power to cancel any land titles.