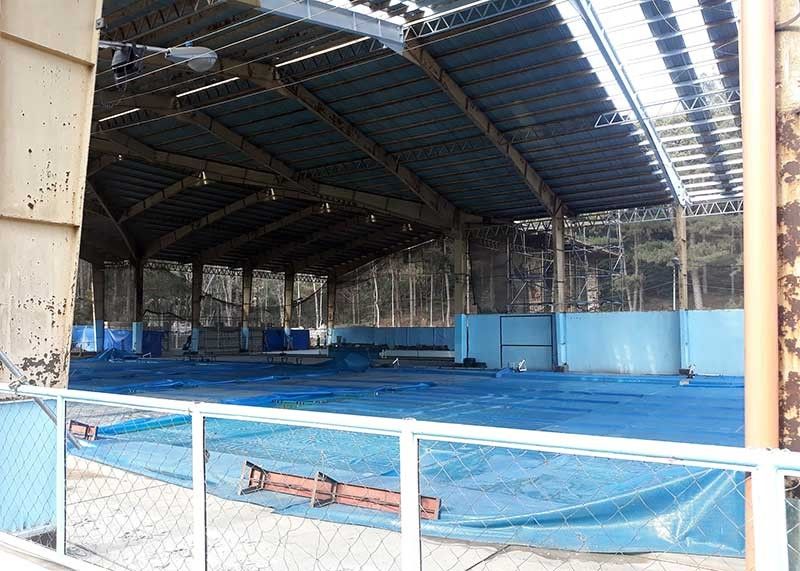 BAGUIO. Improvement of the swimming pool at the Baguio Athletic Bowl started last month, involving the installation of solar panel roofs, repair and other rehabilitation which cost a total of P43 million. Swimmers hit the timing of the repair as most of them are set to compete in the Palarong Pambansa on April 27. (Photo by Roderick Osis)

PALARONG Pambansa bound swimmers lamented the timing of the repair of the Baguio Athletic Bowl swimming pool and is thinking of backing out of the weeklong national sports event.

The rehabilitation of the city’s swimming pool according to an earlier report by the city’s Public Information Office said the project costs P43 million and was given a notice to proceed on February 13.

Rehabilitation will cover the installation of solar panel roofs, repair and rehabilitation of the building (replacement of roof to extend to the bleachers area, enclosure of the structure and repainting of the structural frames), construction of new shower and locker rooms and retiling of the floor.

The project will pilot the solar panel technology which the city adopted in a bid to reduce the city’s power consumption costs by serving as power source in lighting the structure and in heating the Olympic-size swimming pools for trainings and various local, national, regional and international sports competitions.

Eunice Ulat, a secondary girls swimmer who won three individual and one team event gold medal in the recently concluded Cordillera Administrative Region Athletic Association sports meet said she is thinking of backing out due to lack of training.

While the student athlete lauded the upgrading of the swimming pool, Ulat said they could have timed the repair after they have completed their training for Palarong Pambansa scheduled on April 27.

Another swimmer, Julian Wayet who won two individual and one team gold medal in CARAA, also lauded the improvement but seconded Ulat’s observation saying they won’t have any venue to train for the Palarong Pambansa.

“If I can habol sa training I would go but I don’t think so,” said the five time CAR representative in Palarong Pambansa.

Georaloy Palao-ay, information officer of Department of Education Cordillera said the region is set to send 653 athletes and will be joined by 91 delegates and officials with Baguio City, who recently topped the CARAA, have the most athletes with 299.

The upcoming 2019 Palarong Pambansa is reported to reintroduce indigenous sports in addition to its existing games to make the annual multi-sports event special and interesting intended to restore and revive “Laro ng Lahi” sports amidst the popularity of electronic and video-based games played by the millennials over computers, tablets and mobile phones.

Palao-ay meanwhile clarified the region’s athletes will travel to Davao City by plane (not by ship as earlier reported) in a bid to cut the travel time and as an incentive to those who will represent the region in the annual national sports meet.