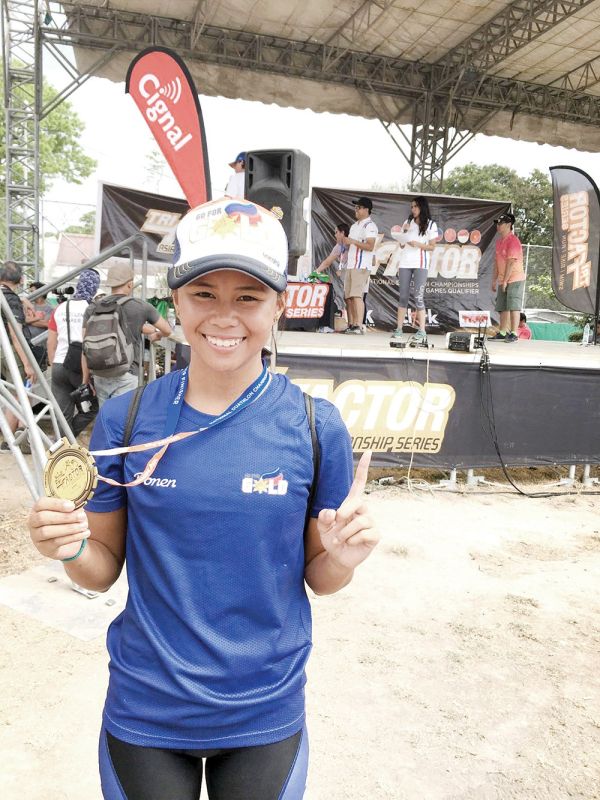 CEBUANA Moira Frances Erediano of Go For Gold PH had a memorable debut in the Tri-Factor Philippines National Duathlon Championship after a gold medal finish in the women’s super sprint race on Sunday, March 31 at the Clark Freeport Zone in Pampanga.

Erediano, a student of Sacred Heart School-Ateneo de Cebu, pulled away from the field in the bike portion after a neck-and-neck battle with Ellis in the first run segment.

Erediano was four seconds behind Ellis in the first run segment but managed to put up a 60-second lead and after clocking 10:34 in the bike leg.

Erediano did not look back and even expanded her lead with a time of 5:34 in the final run segment.

The 14-year-old Erediano considered this race one of her biggest events this season, and winning the title is the prize for the month-long training and hard work.

On the other hand, national team member and Talisay City native Andrew Kim Remolino was his usual force in the men’s junior elite, winning the gold medal in the sprint race.

It was a close duel between Remolino and Quintela as the two athletes finished the first run segment with an identical time of 17:32. Remolino completed the bike segment in 34:31, just two seconds ahead of Quintela, setting up a stage for an exciting finish.

Meanwhile, national team member John Chicano (1:58:24) and Phoebe Kee (2:20:53) were crowned the men’s and women’s champions in the standard race.