Negrenses save 21 megawatts on Earth Hour 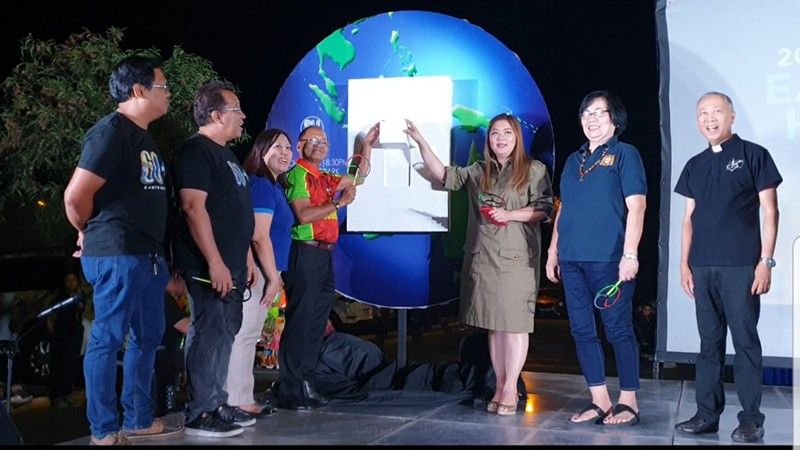 BACOLOD. City Councilors Cindy Rojas (3rd from right) and Bart Orola (center) with SM City Bacolod public relations officer May Castro (3rd from left) and other guests during the switch-off rites that signaled the start of Earth Hour 2019 at the mall's north wing parking lot in the city on Saturday, March 30. (Carla N. Cañet)

A TOTAL of almost 21 megawatts (MW) reduction in power consumption was again noted by three electric cooperatives in Negros Occidental during this year’s Earth Hour on Saturday, March 30.

The same amount of power was conserved by the province during the Earth Hour celebration last year.

Public and private stakeholders in Negros Occidental joined the one-hour switch off starting at 8:30 p.m.

The annual activity, which started in Australia in 2007, is part of the global movement initiated by the World Wide Fund for Nature (WWF) that demonstrates support for protecting the planet and stopping climate change.

The Central Negros Electric Cooperative (Ceneco), catering to the largest number of consumers in the province, noted the biggest reduction in power consumption of 12.83 MW.

The power distribution utility serves consumers in cities of Bacolod, Bago, Talisay and Silay, and towns of Murcia and Salvador Benedicto.

Roel Venus, chief of Ceneco’s Consumer Services Division, said the demand reading of the cooperative an hour before the switch off was 115.81 MW.

“The drop was attributed to households as well as commercial establishments who participated in the Earth Hour by voluntarily switching off their lights,” he added.

Venus said each sector of the community is now actively participating in any initiative on energy conservation.

The issue on energy conservation is already a global concern, he said, adding that a lot of commercial establishments are truly aware of this issue.

Venus said that in fact, business establishments are now rationally conserving power because they knew the significance of the worldwide cause for the environment.

“Ceneco has been actively involved since the start of Earth Hour. We will continue in our own little way to conserve energy for the betterment of the community,” he added.

Noneco caters to consumers in the north portion of the province, from E.B. Magalona to San Carlos City.

Almedelia said there was a total blackout in the city proper and nearby areas.

“Energy conservation is necessary to minimize the generation of additional power supply particularly utilizing dirty sources of energy like coal or diesel power plant,” he added.

The Negros Occidental Electric Cooperative (Noceco), meanwhile, reported a drop of 3.7 MW, which is also lower than last year's 4.6 MW.

Engineer Japheth Mapa, Transmission and Distribution Manager of Noceco, said the cooperative still able to reduce its power demand despite that there were fiestas in most part of southern Negros Occidental.

Mapa said they earlier encouraged their member-consumers to join the activity during their recent 39th Annual General Membership Assembly.

“Local government units, like Kabankalan City, also joined by putting off their street lights,” he added.

In Bacolod City, personnel of SM City Bacolod along with various groups and local government joined the Earth Hour event held at the mall’s parking lot.

Carrying last year's theme “Connect to the Earth,” at least 500 participants convened and took part in the ceremonial lights off.

They also listened to environment and energy savings talks, and shared their pledges to the community.

May Castro, public relations manager of SM City Bacolod, said most of the lights at the mall were switched off.

Castro said this resulted in an hour of energy savings equivalent to 3,446 kilowatt hour amounting to P42,490.

The mall has been celebrating Earth Hour for 11 years already.

Also present during the activity were Councilor Cindy Rojas, representing Mayor Evelio Leonardia, Councilor Bart Orola, and representatives of the Department of Environment and Natural Resources, Earth Hour Core Group, and other stakeholders including schools.

Moreover, youth-led organization Bacolod Core: Children Optimization for the Revitalization of Environment also celebrated Earth hour 2019 through a prayer in the way of Taizé at Barangay Tangub still in Bacolod City.

Elmeer Meeynard Calimpos, co-founder and chairperson of Bacolod Core, said the activity commits to turn off the non-essential lights for one hour and use candlelight in reflecting on the beauty of the night sky through prayer.

Calimpos said it also provided means to involve the community especially the children in Earth Hour.

“The purpose of Earth Hour is to call attention to the beauty and fragility of the living planet,” he said, adding that coming to Taizé is to be invited to search for communion with God through community prayer, song, silence, personal reflection and sharing.

The activity was attended by at least 100 youth, parents and members of other organizations.

Also, it aims to make Taizé as a way of prayer that helps the faithful to celebrate creation while committing to compassionate action for its well-being.

Calimpos said the one hour community prayer is a symbolic call for more action on climate change.

It is more than just turning off the lights, Calimpos said.

This one hour is not going to save the world. But, a core idea to build up the event that every action counts and that individuals can make genuine change to make a better world and the way people perceive about human impact on the planet, he added.