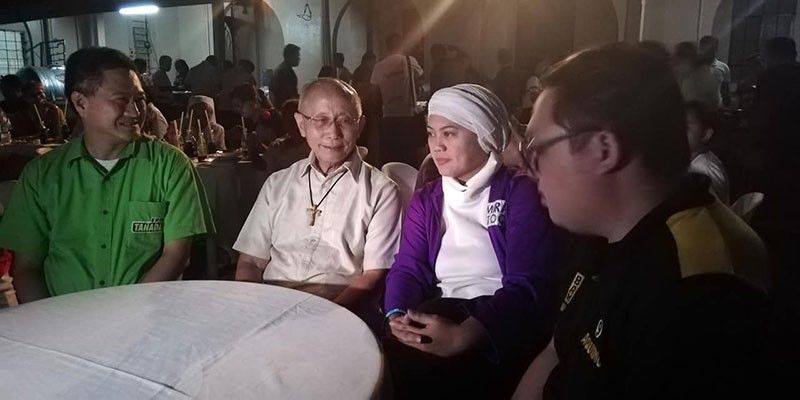 CAGAYAN DE ORO. Outgoing Cagayan de Oro Archbishop Antonio Ledesma (center), who is set to retire this year, welcomes senatorial candidates under the opposition’s “Otso Diretso” during his birthday on March 28. With him are candidates Erin Tañada (left) and Samira Gutoc-Tomawis. (PJ Orias)

Ledesma, who just turned 76 on Thursday, March 28, however said, he is supporting the group not as a leader of the church but on his personal capacity. However, he remained that the church and his capacity as archbishop will be neutral to any political groups.

“Personally I would support, endorse them not as an institutional leader of the church but as a voter, Filipino citizen I agree that these are good choices. I would endorse them but also in private and also to the lay groups that are around,” Ledesma said.

Ledesma announced this during his birthday celebration at the Bishop's Palace Thursday, where he met Otso Diretso senatoriables Samira Gutoc-Tomawis and Erin Tañada.

The Catholic Bishops Conference of the Philippines has earlier issued a pastoral letter, urging faithfuls to engage in circles of discernment and practice “principled, partisan politics.”

He said this means that lay Catholics should choose candidates openly, and should campaign for them.

“There's a people council, lay Catholics and even pastors in Manila, nakapili na gani sila. They chose Otso Dirteso and two independent candidates. They disqualified all potential candidates that were for Charter Change and federalism and also disqualified candidates that are not for environment protection,” he said.

“They are not forcing the voters to vote for them, but saying they are good candidates,” he added.

He also reminds that honesty is still one of the traits of a good candidate.

“If they say they don’t mind not being honest, I think you should scratch them away from the voters list because without honesty how can you trust people to serve well for the common good,” Ledesma said.

“Candidates should be transparent. Some who misused pork barrel are even running again even with allegations. So the mass media should have a role in telling what is the truth and what are the consequences if we just follow our inclinations without looking the records of everyone,” he added.