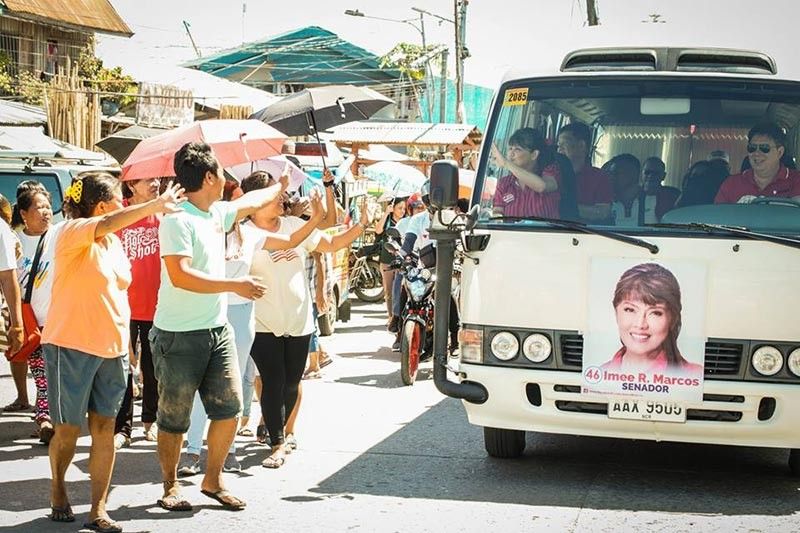 SENATORIAL candidate Imee Marcos is courting the home region of her mother for the coming midterm elections.

“The region needs a representative in the Senate who will see the region’s issues,” said Marcos, the eldest daughter of the late strongman Ferdinand Marcos and former first lady now Ilocos Norte Representative Imelda Marcos, who is a native of Tacloban City.

Marcos said the region is "not well represented in the past years in the Senate."

She added that the region needs one like her "to do work for the betterment of the entire Eastern Visayas."

"Tacloban is close to my heart, it is the home of my mother," Marcos said during her visit to the city on March 31.

As she made her rounds in the city, she said she can replicate the progress she had in Ilocos Norte to Eastern Visayas.

As governor of Ilocos Norte, she said they were able to “lower down poverty rate from 30 percent to three percent.”

“If we made it in Ilocos, we can also make it in Region 8 in addressing poverty incidence,” Marcos added.

According to Marcos, she will revive the “Kadiwa Market System” that was established by his father in 1970s “to lower down the price of basic commodities.”

While Marcos is topping in the recent election survey, her candidacy continued to be marred by controversy from her “dubious” credentials and the ill-gotten wealth of her parents.

In the 2016 elections, former Leyte governor Jericho Petilla and former representative Ferdinand Martin Romualdez also ran in the Senate to represent the region, but they failed in their attempt.

Romualdez now runs as Leyte first district representative for the May 13 elections.

The last time a senator from Eastern Visayas got elected was 64 years ago when Senator Decoroso Rosales of Calbayog City won in 1955. (SunStar Philippines)