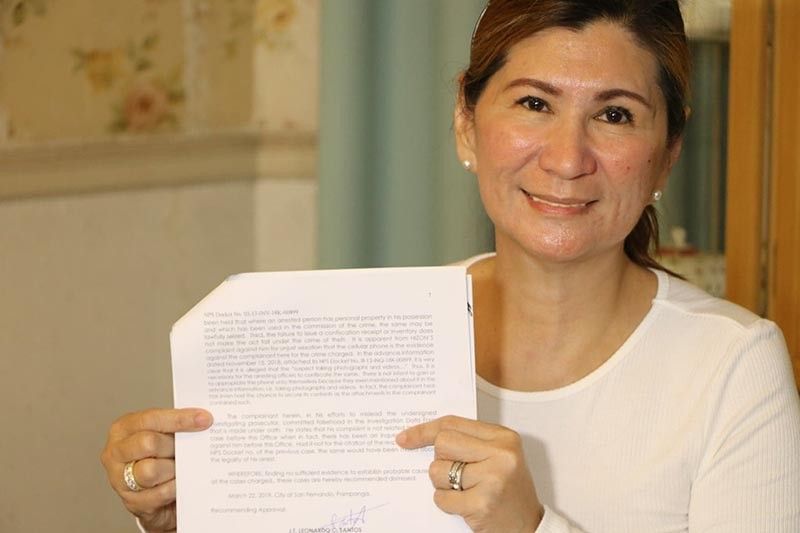 PAMPANGA. City of San Fernando vice mayoralty candidate Councilor Angie Hizon shows a copy of a resolution from the City Prosecutor’s office dismissing the complaint filed against her and four others. (Chris Navarro)

THE Office of Prosecutor dropped all charges against the City Of San Fernando’s vice mayoralty candidate Councilor Angie Hizon and four policemen filed by one Mark Alvin Cortez earlier this year.

In the resolution signed by Assistant City Prosecutor J.T. Leonard Santos and approved by City Prosecutor Giselle Marie Geronimo dated March 22, 2019, the charges of arbitrary detention, unlawful arrest, grave coercion, unjust vexation, theft and violation of Republic Act 7438 or the law defining the rights of a person arrested, detained or under custodial investigation and the duties of arresting, detaining and investigating officers, against the respondents were dismissed.

The case stemmed from an incident that transpired on November 15, 2018 when Cortez went to a Christmas party for senior citizens at the covered court of Barangay Maimpis in this capital city.

Cortez, 34, who was then employed in the office of City Vice Mayor Jimmy Lazatin, alleged that he was wrongfully accused, arrested and detained when he “was only performing my duties as advance party of the vice mayor.”

Cortez said Ronquillo and Reyes accosted him, accusing him of taking photographs and videos of Hizon without permission.

He alleged Hizon berated him in front of many onlookers and forced him to admit taking photographs and video at the instruction of the vice mayor.

However, the Office of the Prosecutor ruled the dismissal of all the charges after it found “no sufficient evidence to establish the probable cause” for the said charges.

“The complainant, herein, in his efforts to mislead the undersigned investigating prosecutor, committed falsehood in the Investigation Data Form that is made under oath. He states that his complaint is not related to another case in this Office, when in fact, there has been an inquest proceeding against him before this Office. Had it not for the citation of the respondents of the previous case, the same would have been misled of the legality of his arrest,” the resolution read.

The resolution noted that there were no probable cause to file for arbitrary detention, unlawful arrest, grave coercion, unjust vexation and theft charges as the actions of respondents were all related to the original case filed by Hizon against Cortez.

Hizon, for her part, expressed joy over the dismissal of the charges against her and fellow respondents which, she said, were only fruits of fabricated stories made to mislead the court and the public.

“We are talking about truth, honesty and integrity here. They could have just admitted that they have done wrong, but they chose to implicate other people just to advance whatever motive they have,” Hizon said.

Hizon said she and her legal counsel will still be studying their next move in relation to the case, especially that the allegations thrown can be classified as malicious.

Meanwhile, Hizon said the original case she filed against Cortez is still ongoing in court.

Asked if her vice mayoralty bid is affected by the charges, Hizon said: “Never has and never will. I am not one to use such cases for my personal gain. These are two different things.”