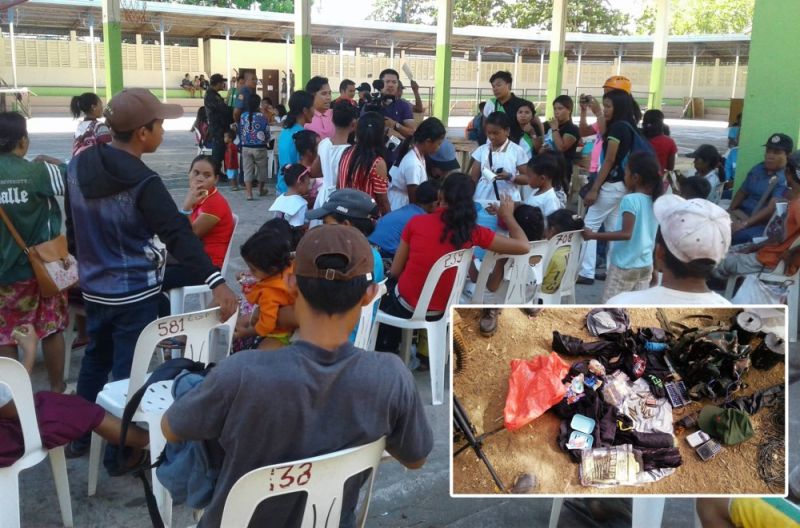 NEGROS. Some residents of Barangay Quintin Remo are temporarily sheltered at a covered court in Barangay 5 following a clash between the military and suspected members of the New People’s Army (NPA) in Moises Padilla. (Inset) Authorities recover war materials, several ammunition, improvised explosive devices and some personal belongings of the NPA during the clash. (Contributed photo)

SOME 1,740 individuals from the villages of Guinpanaan and Quintin Remo in Moises Padilla, Negros Occidental were evacuated, following an encounter between the Philippine Army and suspected New People’s Army (NPA), which also resulted in the injury sustained by a soldier Monday morning, April 1.

Wounded was Corporal Ryan Quebedo, a member of the 62nd Infantry Battalion (IB), who sustained a minor gunshot wound on his shoulder during the clash.

Brigadier General Benedict Arevalo, commander of the 303rd Infantry Brigade of the Philippine Army, said the clash happened while they were conducting pursuit operations on the whereabouts of rebels whom he claimed to be behind the murder of reelectionist Councilor Jolomar Hilario over the weekend.

Early morning of March 31, Hilario was gunned down in front of his family by about 50 unidentified armed men believed to be NPAs on board three trucks inside his residence in Barangay Inolingan.

It was an intense firefight. They (rebels) were really desperate to retaliate, he said.

Fourteen casualties were also reported on the enemy side.

Arevalo said there were reports that five rebels were killed while there were undetermined number of wounded NPAs during the clash.

The NPA, however, in a statement, denied that there were casualties on their side.

It lasted for more than an hour because the NPAs tried to drag the bodies of their colleagues who were killed and wounded in the clash upon their withdrawal, Arevalo said.

Residents from Sitios Cuyaoyao, Tibubong, Ti-os, Santos-Santos, and another sitio in Quintin Remo village were evacuated due to fear caused by the exchange of gunfire. No civilians were harmed.

Arevalo said 500 individuals were temporarily sheltered at the Montilla covered court, 800 at Mamballo covered court, 240 moved to their relatives’ houses, and 200 were placed at the municipal auditorium as of 9:30 p.m. Monday.

They will return to their respective homes today after the clearing operations.

The military will talk to them and explained to them what happened.

The graduation rites of three elementary schools in the village were also reportedly stopped due to the incident.

Mayor Magdaleno Peña has yet to give a statement on the incident but assistance were already provided to the evacuees, who were properly secured by policemen and some military forces.

As this developed, Lieutenant Colonel Egberto Dacoscos, commander of the 62nd IB, in a press statement, said, “The encounter was a result of the relentless efforts of the government against the terrorist group that created fear and harm in the locality.”

This was also linked to the recent apprehension of Francisco Fernandez, a National Democratic Front consultant and secretary of the Komiteng Rehiyong Negros in Laguna, and the 50th founding anniversary of the NPA on March 29.

This is a clear manifestation that the people of Moises Padilla do not want the presence of the armed group in the area, Dacoscos said.

Meanwhile, Arevalo said: “Hindi naman namin gusto na magkaganito [We did not want this to happen]. We hope they (residents) would understand.”

That’s why we always told the residents to never take or hide rebels in their houses because they do not know when the military would strike their offensive operations against the armed men, he said.

“We need your cooperation to address the problem of insurgency in the province,” he told the residents. “Do not tolerate, hide, and support them. Do not be silent about their existence.”

Arevalo said the killing of Hilario can be considered as election-related because he might be politically lined up under Peña, who helped the authorities in the arrest of Fernandez.

The NPA hate him (Peña). They (rebels) are desperate to retaliate because of their leader’s apprehension, Arevalo also said.

Though it happened during the election period, Arevalo said it is not alarming.

“Expect more offensive attacks from the military especially this political season. We will be more aggressive against them (rebels),” he said.

More soldiers and policemen were deployed in the town, following the death of a government official and the recent clash.

He, however, did not provide the specific number for security reasons.

He said their deployment is just temporary.

A Special Investigation Task Group Hilario was created Monday to resolve the crime.

The witnesses should come out and cooperate with the police so that justice will be served for him and his family, he said.

Arevalo, for his part, said they also deployed more forces in the area but refused to divulge their number as well since it is part of their operational plan.

The government forces continue to urge terrorist groups to surrender and lay down their arms and pave a way out of the armed struggle, go back to the folds of the law and avail themselves of the Enhanced-Comprehensive Local Integration Program in order to provide their families a brighter future.